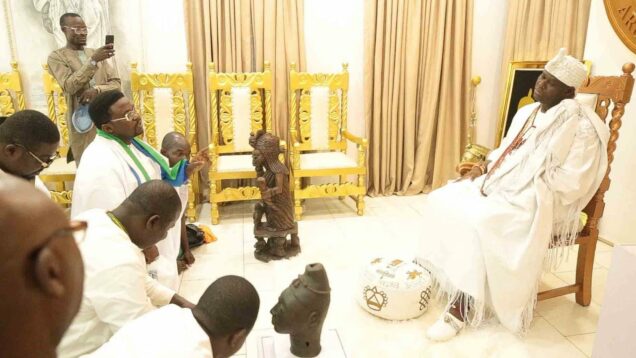 Ooni of Ife and Olufemi Ajadi

The Ooni of Ife, Oba Adeyeye Enitan Ogunwusi, on Friday received youthful presidential aspirant, Olufemi Ajadi and his entourage in his palace, praying for the success of the aspirant at the 2023 polls.

Ajadi, a strong contender for the 2023 presidency on the platform of the New Nigeria People’s Party (NNPP), had gone to the palace to seek royal blessings and guidance in his quest.

His royal majesty, while welcoming the entourage, enjoined the politician to remain focused on the race, wishing him success, long life, and prosperity.

“I wish you well; I pray that your political ambition would come to pass with long life and prosperity. I pray that all obstacles from outside and within will not overcome you,” Ooni prayed.

He commended the courage and the political energy Ajadi had thus far brought to his quest, urging him to remain politically persistent, as the only way to prove his mettle at the polls.

Speaking earlier, Ajadi had told the Ooni of his roots as an indigenous person from Ibadan, Oyo state, who however resides and practices politics in Obafemi Owode Local Government, Ogun State.

He added that he had come to pay homage, brief his royal majesty on his efforts thus far and also seek guidance.

Ajadi said that he had also come to the king on the best way that the interest of the South-west would also be effectively taken care of should it be tabled before his royal majesty.

Among those in Ajadi’s entourage was Hon. Wasiu Oluwafemi Ajirotutu, a Senatorial aspirant for Ogun East Senatorial District, is also the Director-General of the Olufemi Ajadi’s campaign team.

Earlier, the team had been entertained by rich Yoruba cultural displays by different musical troupes in the palace.