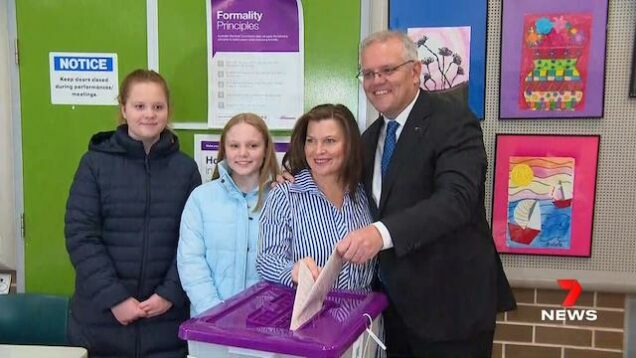 Australians are voting today in a national election, with opinion polls showing the opposition Labor Party narrowly ahead of the ruling conservative coalition.

A strong showing by climate-focussed independents could mean a hung parliament.

A Newspoll survey by The Australian newspaper out on election day showed Labor’s lead dipping a point to 53-47 on a two-party-preferred basis against the ruling coalition, largely in line with other election polls.

Morrison and opposition leader Anthony Albanese cast their votes in Sydney late in the morning after making whistle-stop tours across marginal seats in the final two days of a campaign dominated by rising living costs, climate change and integrity. read more

“Today, Australians are making a big choice about their future,” Morrison told reporters outside the voting centre. “Australia needs someone who knows how to manage money, knows how to deal with national security interests, knows how to move forward and secure that strong economy.”

Albanese said Australians want a change of government, which he said had nothing “to be proud of”.

“I’ve put us in a position where at worst we’re competitive today. We’re in the hunt here,” Albanese said about his chances at the polls.

“In the fourth quarter, I want to kick with the wind at my back, and I believe we have the wind at our back,” he said in a reference to Australian Rules football, one of the country’s most popular sports.

As Labor focussed on spiking inflation and sluggish wage growth, Morrison made the country’s lowest unemployment in almost half a century the centrepiece of his campaign’s final hours. Inflation has risen twice as fast as wages, keeping real income in the red.