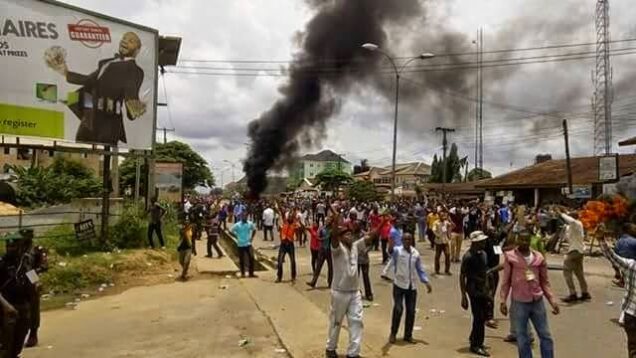 A Christian girl was said to have escaped lynching after she posted a video of a Muslim who converted to Christianity on a WhatsApp group.

It was gathered that her co-Muslim workers were not happy with the message they tagged blasphemy and incited others for the riot.

The girl was said to have been rescued by some Christian faithful before she was lynched.

The riot spread in the area as irate youths attacked houses and set them ablaze, while an ECWA pastor was said to have been injured in the fracas.

A shop belonging to ECWA church was set ablaze by the rampaging youths.

A source told The Punch that “We were at home this evening when we heard shouts from some Muslim youths in their numbers who went on the rampage and besieged an ECWA Church in the area.

“But Christian youths and others resisted and repelled them but that was after they had burnt down a shop attached to the church. Many houses were burnt down by the rampaging youths.

“In the process, one of the pastors of the ECWA church was seriously wounded; as I speak to you now, efforts are on to save his life.”

The riot is coming barely two weeks after a Christian girl, Deborah Samuel was burnt to death at the Shehu Shagari College of Education, Sokoto by Muslim extremists for allegedly blaspheming Muhammed.

The following day, a massive protest rocked Sokoto metropolis as youths burnt churches and houses and demanded the release of the killers of Deborah.