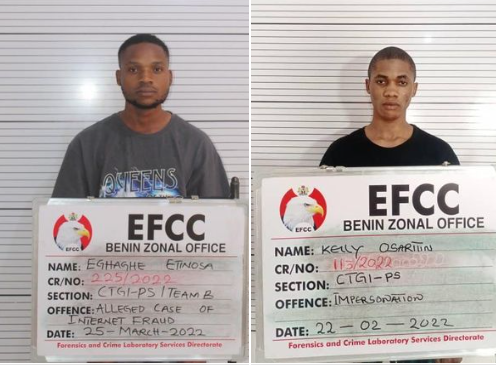 Two internet fraudsters, Eghaghe Etinosa and Osaretin Kelly have been jailed four years by a court in Benin for N1.3 billion fraud.
Justice Efe Ikponmwonba of the Edo State High Court sitting in Benin-City jailed the duo on Thursday after convicting them of fraud.
They were jailed for defrauding their victims a total sum of N1, 321,273,278.
They were arraigned on one–count separate charge by the Benin Zonal Command of the EFCC.
Etinosa was docked for serving as a picker “aka Aza man,” (receiver of funds) for internet fraudsters.
On his part, Kelly impersonated the identity of one Dottie Ayanda, a South African woman in order to defraud his victims.
Tags:   Eghaghe Etinosa   Osaretin Kelly