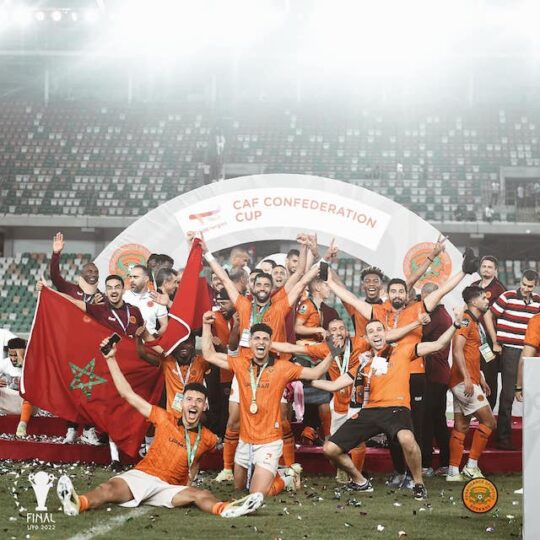 RS Berkane won the 2021/2022 Total Energies CAF Confederation Cup after seeing off Orlando Pirates via a 5-4 penalty shootout in the final match at the Godswill Akpabio Stadium in Uyo.

It was their second championship in three years and completed a Moroccan total dominance of the tournament in the last three finals.

The final game in Uyo, Akwa Ibom State in Nigeria, was forced into penalty kicks following a 1-1 draw after regulation and extra time.

It was the Moroccans whose luck shone above their South African counterparts.

Orlando Pirates forward Thembinkosi Lorch suffered the extremes of two emotions, scoring a 117th minute equaliser, and then stepping up to see his penalty kick saved in the shootout.

He was the only one who missed on Orlando Pirates’ side.

Happy Jele scored the first for Pirates before Lorch, who was also named man of the match, missed the second.

The game was forced into penalty kicks after a 1-1 draw in regulation and extra time, where Orlando Pirates dominated and had most of the goalscoring opportunities.

The game stood goalless after 90 minutes, forcing it into an extra 30.

Seven minutes into the first period of added time, RS Berkane who had not created much all game had their best chance to score, and they took it.

Referee Janny Sikazwe visited the pitchside monitor to check on a foul by substitute Monare on Mokadem from a corner-kick.

The Orlando Pirates man was adjudged to have swept down Mokadem inside the box.

Youssef El Fahli stepped forward to send Ofori the wrong way to net his fifth goal of the campaign.

Orlando Pirates fought to get themselves back into contention and piled on the pressure, and were rewarded for their hunger three minutes to the end through a bizarre goal by Lorch.

The Orlando Pirates forward had intended to push a pass into the penalty box as they pushed Berkane into their own area.

However, his intended pass was missed by everyone and crept into the bottom right of Akbi Hamiani’s goal.

In regulation time, Orlando Pirates had the chances and should have wrapped up the game early if they had been clinical enough.

As early as the third minute of the game, they had a glorious opportunity when Goodman Mosele sent Dean Hotto through on goal with a peach of a through pass.

But the winger could not get a strong curl on the ball with space ahead of him.

Mosele created another chance in the 18th minute when he whipped a cross from the right, but skipper Jele’s header looped just over the target.

Their top goalscorer, Bandile Shandu, then forced RS Berkane goalkeeper Hamiani to a neat save in the 33rd minute.

His low sweep from the edge of the box was palmed away by a strong right hand from the shot-stopper.

In the second half, RS Berkane somehow raised their attacking game but could not thread in the shots at goal, with Ofori not being busy for most of the game.

With no goals in regular time, the game had to go to an extra 30 minutes and it ended 1-1, before the winners were decided from 12 yards out.