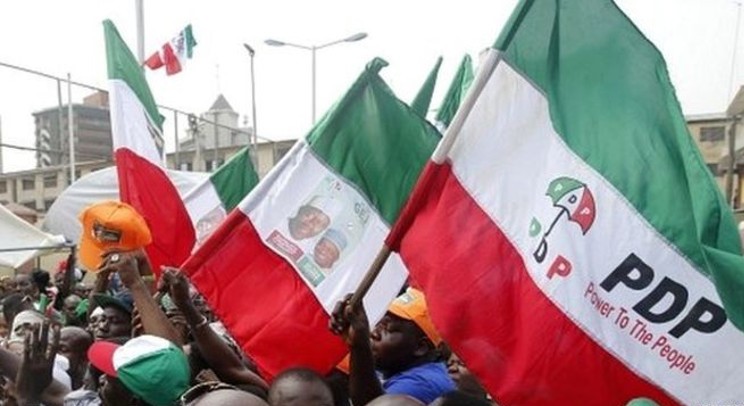 The scheduled primaries of the Peoples Democratic Party (PDP) for State House of Assembly and Federal House of Representatives, met with slight delays across Lagos State.

Although party members, delegates and security personnel were present and on ground as early as 9 am, the primaries could not take off.

No party official or committee member from the PDP national headquarters in charge of the primaries could be seen at the venue of Surulere Constituency I, while few party members were seen around.

The situation around the area was calm, as party members gathered in cluster groups deliberating and strategising.

Mr Sesan Lawrence, Assistant Secretary, PDP in Surulere Local Government Area, explained that all was set for the smooth conduct of the primaries. However, the late arrival of the returning officers was responsible for the delay.

Lawrence said that five candidates were contesting for both categories (House of Assembly and House of Representatives), adding that 19 delegates would be voting to elect the candidate that would contest on the party platform in the 2023 general elections.

He said that five-party agents would represent each candidate to ensure transparency.

“There are six wards at the LGA level for Surulere constituency II and we have three delegates each per ward and one national delegate. We have 19 delegates altogether,” Lawrence said.

Meanwhile, at the Lagos Island Constituency II, nothing was happening but an Independent National Electoral Commission (INEC) official arrived at exactly 11:30 a.m.

Alhaji Shehu Olawepo, the PDP Chairman in the area said they expected all the delegates to be available soon, and security officials could be seen patrolling the venue.

One of the aspirants, Lawal Akinsemoyin was present at the venue.

In Surulere Constituency II, nothing was also happening as at 11:50 a.m., the ward delegates, national delegates and security officials were present waiting for the returning officers.

In Eti-Osa Constituency 1, as of 11.35 a.m., the election was yet to commence, however, the delegates and the six candidates contesting for the state house of assembly were present.

Correspondents noted that there was also a heavy security presence.

According to the Chairman of the constituency, Yusuf Olatunji, they are awaiting the party electoral officers and the INEC officers before the election can commence.

In Oshodi-Isolo Constituency 1 at St Dominic’s Hall, Mafoluku, nothing was happening as of 11.43 a.m., and presently the hall was still being used for church service.

At Agege, Mr Olayiwola Otun, the PDP Chairman in Agege Local Government, said that the delegates and party members were waiting for the arrival of the state executives and the returning officers.

Security personnel and party members were on the ground at Agege Constituency 1.

At Alimosho Constituency II, nothing is happening at the venue as of 11.51 am. Although, the General Secretary of the party, Mr Oriyomi Ezekiel, said they were awaiting the arrival of the returning officers for the state.

Meanwhile, the initial venue designated for the primaries – Sugarland Hotel at Iliasu road, was changed to Samkoll Garden along Ikotun road.

At all the venues statewide, there was a significant presence of security officers.