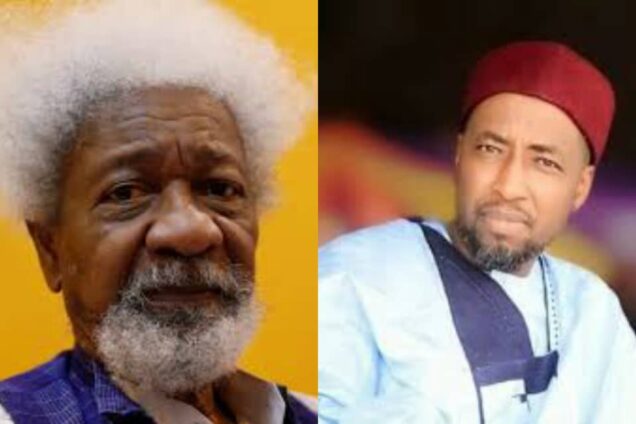 Nobel Laureate, Prof. Wole Soyinka has demanded the sack of the Chief Imam of Abuja National Mosque, Prof. Ibrahim Maqari for justifying the brutal murder of Deborah Samuel for alleged blasphemy in Sokoto.

Deborah Samuel was burnt to death by Muslim extremists at the Shehu Shagari College of Education, Sokoto for allegedly blaspheming Muhammed.

Maqari, in justifying the murder of Deborah on his Twitter handle also warned about the grievous consequences that awaited those who also cross the redline.

He said: “It should be known to everyone that we the Muslims have some red lines beyond which MUST NOT be crossed. The dignity of the Prophet (PBUH) is at the forefront of the red lines. If our grievances are not properly addressed, then you should not be criticized for addressing them ourselves.”

Reacting to this in a speech delivered at the launching of the memorial publication on the late General Ibrahim Attahiru at Ladi Kwale Hall, Abuja on Saturday, Soyinka lamented the brutal murder of Deborah.

He said the nation’s president, traditional rulers – among them the Sultan of Sokoto who also serves as the Amir of Nigerian Muslims, women organizations, workers’ unions and professionals from all walks of life, young and old, had raised their voices in accents of apology and condemnation of Deborah’s murder.

“However a glorified cleric, no less than the Grand Vizier oi the iconic Mosque of the nation’s capital, Abuja, has inserted a dissenting voice. The young woman, Deborah, he declared, deserved her death. This mullah, allegedly a man of learning, since his name is professorially captioned, says that there is a line, a red line that none of us must cross, no matter who we are, what we think, profess or value.

“Like the late Ayatollah Khomeini of Iran, this mere mortal has declared himself a Supreme Being with the power of life and death over all the denizens of the world. His call is unambiguous. Professor Ibrahim Maqari has placed his myrmidons of faith on the alert, primed to emulate the example of these death dealing mutants of  fanatic indoctrination,” he said.

Soyinka added: “Permit me a digression, one that is however pertinent to this occasion. I must take you back to a certain indelibly bloodstained day of December 2015.  On that day,  and not for the first time in the career of a certain religious sect, hundreds of  lives were mown down in broad daylight, and within minutes,  in the state of Kaduna.

“The presumed leaders of the alleged provocation were locked up, charged with every kind of criminal conduct, and are still battling, even till today, for their full liberation.  Now, what exactly was their crime? They also had drawn a line. That line, they declared, should not be crossed by any. Well, it seemed they had met their match. The Army also had a line, but the Shiite leaders appeared not to know where it was drawn, For that, they paid a deadly forfeit of numerous lives.

“So there we are, arbitrary lines crisscrossing, drawn by individuals and  constituencies of beliefs and non-beliefs, of power and aspirants of power. Nowhere do the belligerents profess the common constitutional line and the boundaries of legitimate conduct that supposedly define the imperatives of co-habitation and respect for a human commonality known as – life.

” In the ongoing war in the Ukraine, it is being demonstrated that an ancient line remains for ever with us, and that those who deliberately kill defenceless civilians are regarded as war criminals, to be placed on trial at the first opportunity, A Russian soldier, at this very moment, is undergoing that line of instruction. He has not only pleaded guilty, but actually confronted the widow with the words “I am sorry”.

“Professor Imam Ibrahim Maqari however insists, with a handful of others including a vocal serving policeman quite recently, that there is no remorse attached to the torture and lynching of a young student on this earth we all share. To anyone who cares to listen, Maqari has implicitly directed his followers to take the law into their own hands in the name of religion, and in a nation beset on all sides by wars of ultra-nationalism and religious fanaticism. That is the message of a supposedly holy man to youths, to us, his message to a nation embroiled in a  madness of multiple insurgencies.”

Soyinka said he had also drawn his own line decades ago, as contained in numerous statements, among them, most pertinently, THE UNAPPEASABLE PRICE OF APPEASEMENT – pertinent because it is within the cesspit of appeasement that this nation is currently mired.

He said he was compelled to draw his own line when an acting governor of Zamfara state assumed the right to pronounce a killing fatwa on a young Nigerian journalist for alleged blasphemy, enjoined his listeners wherever situated in the world to terminate the existence of that young woman.

“That same ex-governor – for those who have missed the comic sequel – has actually thrown his hat in the ring for the presidency of this nation. A macabre joke that is however beyond any form of amusement. Yet such is the one-sided tolerance culture of the nation, its permissiveness empowers  murder through surrogates, instigating killing sprees at will, and sometimes even assume personal supervision of a mission of death and destruction.

“No matter which, such enemies of life are free to contend for a position of power on a national level, where they can proceed to draw lines against the rest of the world at will and spread the cloak of immunity as reward of unconscionable defiance,” he added.

The Nobel Laureate added that it was time for all group interests to draw their lines, to decide where they intersected with others, where they run parallel, and where they diverged and/or snarl into a chaotic maze.

“If Professor Grand Imam Maqari can  draw a line in blood,  the rest of the community of equal rights must proceed to draw their own, but they will do so in less primitive, bloodthirsty mode, in full respect of human dignity.

“That apostate of the creed of humanity,  Professor Maqari, must be removed from office. It is no longer sufficient for all to declaim that Islam is this and that, that the Sharia is thus and thus, that Prophet Mohammed set this or that example and made this or that humanistic pronouncement. We have gone beyond theocratic rhetoric that merely pays lip service to civilized norms. Let all pietistic denunciations be backed  by affirmative action,” he stated.

Soyinka emphasised that the Grand Seer of Abuja mosque should be hounded from office and should be tried under any existing laws that approximate hate rhetoric, incitement to murder and abuse of office.

“The nation is confronted with just two propositions: One, that the Sultan of Sokoto is right, a position that is daily reinforced by voices stretching from even  Zamfara in the north to the southern voice of the Chief Imam of the Yoruba. The alternative position is that Professor Ibrahim Maqari is the acknowledged Oracle of Islamic Ethics.  Between the two, a  choice must be made, a choice that is both moral and constitutional.

“Both the Sultan and Professor Maqafi cannot be right. And that choice does not belong to any esoteric domain. It is not grounded in privileged, hermetic caucuses of  religious doctrine and interior revelations. It is not subject to spiritual pietisms. It is straightforward: either murder is criminal and abhorrent, or it is a legitimate pastime, to be indulged at whim and by any.

“What exactly is “blasphemy” in a polity of religious pluralism? Presumably the twenty four heroic lawyers who have sprung to the defence of the accused killers  will also take up that question  and enlighten us along the exposition of their briefs. Until then, however, the protocols of association, known as the constitution, remain the sole arbiter.

“We, on this side of humanity, must draw  our  defining line, and that line reads simply: do not extend your religious predisposition beyond the realms of constitutional legitimacy. Do not flout the protocols of association. Else, pack your private baggage of homicidal precepts and depart for the purist wilderness of blind Submission.

“We have already paid, are still paying too high a price for the culture of Appeasement and Impunity.  Let it end now, in Affirmative Action. That a new generation should also be programmed to aspire to brutish existence below the Lowest Common Denominators of what constitutes “human” ?  Surely that is where any self-respecting nation should draw its defining, unbreakable line,” he stated.