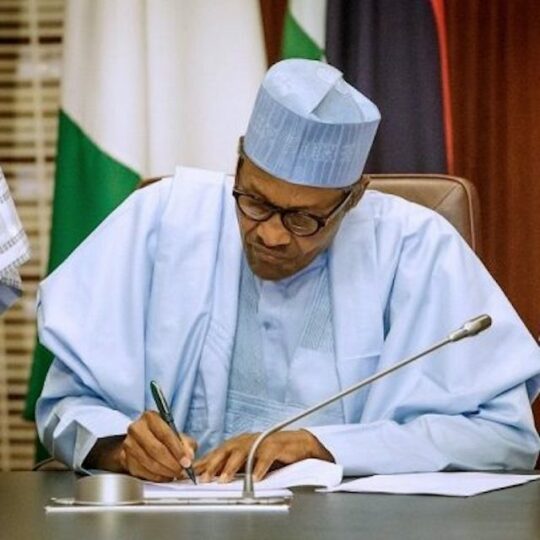 President Muhammadu Buhari has returned to Abuja after a two-day visit to Abu Dhabi, the capital of the United Arab Emirates (UAE).

The Air Force One aircraft carrying the president and members of his entourage landed at the Presidential Wing of the Nnamdi Azikiwe International Airport, Abuja, at about 4.10 p.m.

The Nigerian leader returned to Abuja amidst confusion on whether he had signed the Electoral Act Amendment Bill forwarded to him by the National Assembly last week.

The amendment is crucial to the participation of statutory delegates at the primaries and national convention of political parties.

They have been excluded from voting and being voted for during the exercises in the previous amendment signed into law by the President.

When asked to confirm whether or not Buhari had indeed assented to the latest amendment, the Special Assistant to the President on National Assembly (Senate), Sen. Jide Omoworare, simply said the president ”should have signed” the amended fresh electoral act into law.

“I can confirm to you that Mr President signed the bill into law this afternoon and we are all happy about it as it will give us and other statutory delegates the power to vote at the primaries,” Chinedu said.

However, NAN reliably gathered that the president had not signed the latest Electoral Act Amendment as being speculated in some quarters.