For Arsenal, emphatic win too little to make Top 4 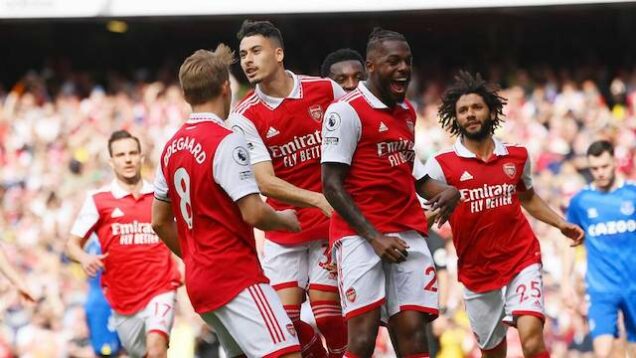 Arsenal hammer Everton but it was of no use

Arsenal did all they could as they hammered Everton 5-1 on Sunday but there was little air of celebration for the fans as they missed out on winning a Champions League ticket.

A week ago this fixture promised to be dripping with jeopardy, with Arsenal still strongly in the Champions League hunt and Everton fighting for survival.

But Arsenal’s 2-0 defeat at Newcastle United left them needing Spurs to slip up, while Everton’s 3-2 comeback win over Crystal Palace ensured their safety.

Relieved Everton coach Frank Lampard made six changes and it showed as his team were over-run for most of the game.

They deservedly trailed at halftime to a Gabriel Martinelli penalty via a VAR handball call and an Eddie Nketiah header within four minutes, before substitute Donny van de Beek pulled one back in stoppage time.

Arsenal repeated the trick within three minutes midway through the second half as Cedric Soares swept in the third.

Gabriel Magalhaes banged in the fourth before Martin Odegaard topped it off with an excellent goal, drifting past two defenders then slotting into the corner.

At full time the home fans gave Arsenal a good send-off but it was the Everton supporters, still giddy from their Crystal Palace comeback on Thursday, who were making all the noise.

This was as Manchester City completed an incredible comeback of their own to pip Liverpool to the Premier League title.

Arsenal, who last played in the Champions League in 2016-17 after 19 straight years of making it under Arsene Wenger, will have to settle for a place in the Europa League.

Everton will just be relieved to be still in the top flight – where they have spent more years than any other club – come August.