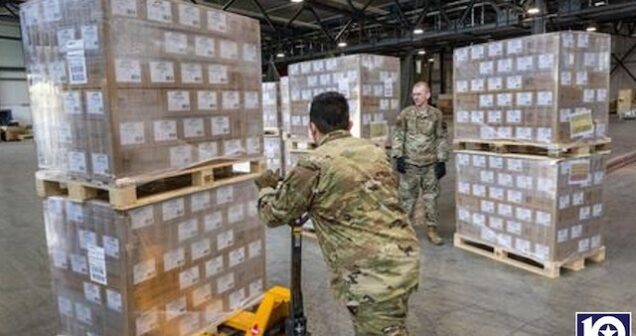 Nestle has delivered its first shipment of infant formula from Europe to address a critical shortage in the United States.

The cargo was brought by a military plane, which landed in Indianapolis on Sunday.

A Feb. 17 recall by top baby formula maker Abbott Laboratories (ABT.N) and the closing of its manufacturing plant in Sturgis, Michigan has created one of the biggest infant formula shortages in recent history for U.S. families.

“There’s about enough formula on that plane, specialty medical grade formula, for about a half a million bottles. That’s about 15% of the overall national volume this coming week,” White House National Economic Council Director Brian Deese told Fox News Sunday.

Agriculture Secretary Tom Vilsack was there to greet the plane.

The supplies are made up of 132 pallets of Nestle’s Health Science Alfamino and Alfamino Jr infant formulas.

The shipments are coming in under the Biden administration’s Operation Fly Formula effort aimed at alleviating the critical supply shortage of infant formula in the United States.

Abbott Chief Executive Robert Ford apologized for the formula shortage on Sunday and promised to fix it, adding that the plant would be reopened in the first week of June, and it would take six-to-eight weeks for products to reach store shelves.

“We’re sorry to every family we’ve let down since our voluntary recall exacerbated our nation’s baby formula shortage,” Ford wrote in an opinion column published in the Washington Post.

Ford said the U.S. Food and Drug Administration investigation did not find links between the formula production area of Michigan facility and four cases of sick children but that it did find evidence of bacteria present.