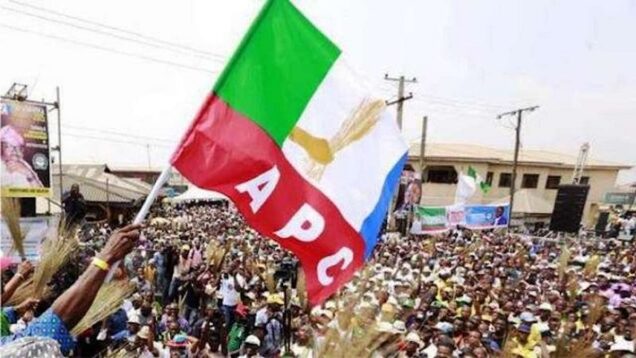 Twenty- Seven All Progressives Congress (APC) House of Assembly aspirants in Ebonyi, have alleged plans by the screening committee to disqualify them from the primary election of the party.

The spokesperson for the aspirants, Mr Chukwuoji Igodo, said this when he addressed a news conference in Abakaliki on Sunday.

Igodo said that a member of the screening committee had told them shortly after their screening that they were not cleared due to non payment of party dues.

He said that the aspirants had duly paid their party dues and the that party also issued them with receipts of payment.

Igodo said that disqualifying any of them would be illegal and unconstitutional and would be challenged at the appropriate legal authorities.

“Under the 1999 Constitution political parties are not allowed to impose nomination or disqualification criteria, measures or conditions on any aspirant or candidate for any election,” he said.

“We wish to state that we duly paid our party dues, receipts issued to us by the party and we are with the receipts.

“There is no reason to disqualify us from contesting the election because we met all party requirements for the election.

“We call on the national chairman of the party to intervene and ensure that the right thing is done, because we have strong conviction that some powerful forces within government are working with PDP against APC victory ahead of 2023.

“If the party allows us to be screened out of the primaries unduly, we shall be left with no option than to seek redress in court.

“We state unequivocally that we shall challenge our disqualification should the committee be allowed to go ahead to disqualify us,” Orji said.

Reacting, Chief Stanley Okoro-Emegha, the state Chairman of the pary described the allegation as baseless, unfounded and spurious.

He urged party faithful, supporters and the general public to discountenance the allegation that there was plan to disqualify some aspirants in the state.

“While must these few elements and unpopular individuals keep smearing the party at all cost.

“They claimed that the screening committee informed them that they were not cleared based on certain issues which only the committee has the prerogative to decide and instead of interfacing with them, they rather chose to castigate the governor and myself.

“What a pity! You know that it is easier to give a dog name just to kill it than taking responsibility.

“I advise them to explore legally available windows to seek for redress if they are not comfortable with the committee’s work rather than to discredit my leadership.

“They also have my support in this regard if they so much wish; they should also remember that the screening committee is not answerable to the state but the national body that constituted it,” he said.