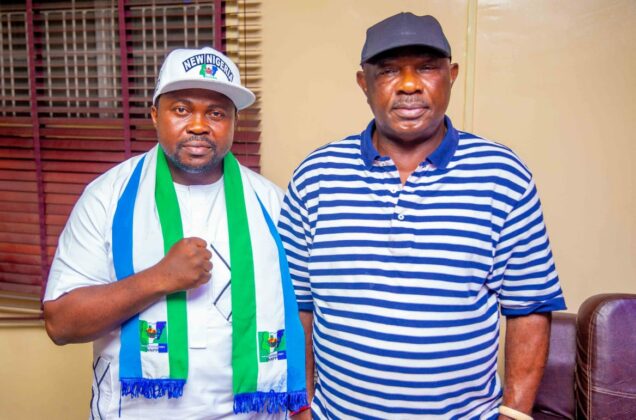 Comrade Olufemi Ajadi, a strong contender in the 2023 presidential election on the platform of the New Nigeria People’s Party (NNPP), visited the party’s founder, Mr. Boniface Aniebonam in Lagos on Sunday.

Ajadi and his entourage who were later joined by the Ogun State chairman of the party, Mr. Oginni Olaposi were warmly received by Aniebonam.

Before then, Consultant Media and Strategy of the Olufemi Ajadi Campaign Organisation, Mr. Cami Ezenwa, preparatory to introducing the candidate, had noted the dogged contributions of Aniebonam in the nation’s maritime sector adding that he was personally impressed to learn that he was the brain behind the NNPP.

Mr Ezenwa also described Ajadi as a committed young man with vast industrial and entrepreneurial experience, who was now ready to bring his youthful energy to the nation’s polity through elective office.

He said he personally decided to identify with the Ajadi’s presidential quest, after discovering that he was focused and determined to take the office.

Ezenwa’s submissions were later echoed by Oginni, who also described the former as a young, diligent, and serious-minded politician, who, since he joined the party had helped in raising its profile tremendously.

He said he had been particularly impressed by Ajadi’s reference to being directed by God to join politics and that even without knowing about the party, he had been funding a youth-based group, All Nigerian Youths Reoriented whose name and philosophies tallied with those of NNPP.

Responding, Aniebonam went down memory lane saying that he was called by God to form the NNPP, for the liberation of the citizens of Nigeria, adding that in its 21 years of existence, it had become, to believe that NNPP is the only solution to the problem of Nigeria.

He said, “Ajadi is also a son of God that was the reason he told the National Executives of the party at Abuja that the progress of the party is a priority before his ambition.”

He said Ajadi’s divine ambition is true because he had had of his coming through the voice of God as God had told him to create the political party for God’s intervention In Nigeria to come into reality.

He said the situation of Nigeria is at is today because of the bad leadership, adding that separatist groups like the Indigenous People of Biafra (IPOB), Oodua People’s Congress (OPC), and agitators in the Niger Delta were clamoring for breakups because of leadership failure.

Aniebonam also listed for Ajadi, what he described as three essentials of ascendency to power, adding that possession of one or two was not enough, but the availability of all.

Earlier, Ajadi had said he had been propagating the New Nigeria ideology since 2018; not knowing that there was a political party by that name.

He said he had also been received by the executives of the party in Ogun State and honored to be in the presence of the founder.