Amaechi: I will fight poverty, insecurity 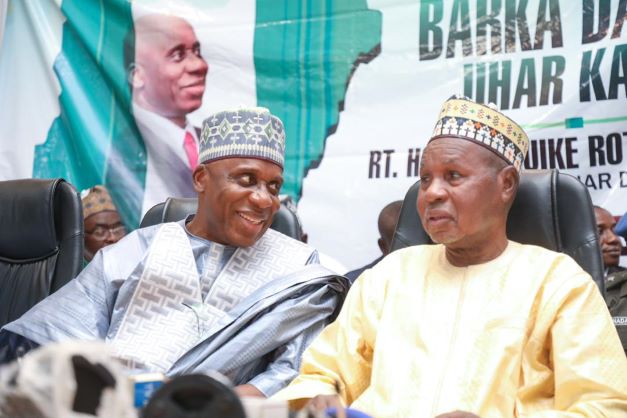 Former Minister of Transportation and Presidential aspirant of the All Progressives Congress (APC), Rt Hon. Chibuike Rotimi Amaechi has promised to turn the tide of insecurity and poverty around in the country if given the opportunity to be President in 2023.

Amaechi was speaking to delegates of the APC in Katsina State, the home State of President Muhammadu Buhari during his consultative visit on Monday.

He said if things don’t change soon, Nigeria may disintegrate to the point where there’s a total divide between the rich and the poor to the detriment of peace and security in the country, offering himself as the right candidate to restore peace and equity to Nigeria.

“If Nigeria does not move back to agriculture and move from agriculture to industrial and manufacturing, the breakup you’ll see is the poor versus the rich. It will not be Muslims versus Christian’s or North versus South. It will be the rich versus the poor. So we must build the Nigerian economy to accommodate the poor. If you don’t accommodate the poor, you will run away.

“Have you heard of Songhai farm? Three hundred hectares of Songhai farm, the biggest Songhai farm in the world was built by me. We built hostels for 500 farmers, when we train you and graduate you, we give you money, give you product to go and start your own farm, then we take another 500. We began to produce. By the time I left office, the farm was producing money to run itself, no more government money.
We created 2000 hectares of Banana farm. We did it to create employment. Everyday we employed 500 persons.

On insecurity, Amaechi narrated how he fought militancy and kidnapping to a standstill as Governor of Rivers State, adding, “That’s why anywhere I go (for consultations with delegates) I go with Gen. Buratai (former Chief of Army Staff, who was then Brigade Commander in Rivers State) and former Inspector General of Police, Abba Suleiman, who was Commissioner of Police in Rivers State at the time. Former Chief of Air Staff, Sadique Abubakar was Air Force commander (in Rivers State at the time). We were bombing them everyday until they ran away.”

Amaechi said he has been blessed with leadership over the years and he has performed in every position he has held, noting that his bid to become president is aimed at giving back to the country and the people.

“God has blessed me enough. What I’m doing is giving back. God has made me Speaker for a eight years, Governor for eight years, God has blessed me through President Buhari to make me Minister for Transportation. In all of them, I discharged my responsibility. I don’t listen to people who gossip. When we were to do Kano-Maradi rail line, I hope you read the newspapers. There’s no name they did not call me, I did not listen, I went ahead with Kano-Maradi, because I have two arguments. Are you (the people of Katsina State) not Nigerians? Are they saying railway should not get to Katsina because you’re not Nigerians? So because you’re Nigerians, you’re entitled to railway. They can say whatever they like.

“With that same spirit, if I become president, I’ll be President for every Nigerian. I know you have employed me, I am your servant. For women, I don’t believe in 30 percent, you are equal to men, you must be given equal opportunities.

Speaking earlier, Governor of Katsina State, Aminu Bello Masari said with Amaechi’s performance and level of development projects put into Katsina State, the state should be the one blowing his trumpet.

“Chibuike Amaechi is a personal friend and indeed a friend in need. We have come a long way. I know him to be a very hardworking person and courageous person…You are not the one to blow your trumpet. I think we are in a better position to blow your trumpet.,” Masari said.

The Governor outlined the issue of Katsina State to include insecurity, banditry, kidnapping and the burden of rehabilitating displaced people, adding that the people of Katsina would go with a candidate capable of fixing those issues.

“To the people of Katsina, these are very very important for anybody coming to give us assurance for security, restoration of our normal lives,” he said.

For the Chairman of the APC in Katsina State, Muhammad Sani, it’s time for the people of the State to pay back the good deeds of the former Transportation Minister, Rotimi Amaechi, towards them.

He said, “Your visionary leadership traits, your charisma, your can-do Spirit has not only transformed Katsina State to a mini Nigeria but, set it on the path of development. This indeed has made your name a household name among your equals.

“Your foresight of establishing the University of transportation, rail line passing through Daura to Niger Republic and other institutions as well as other developmental strides have really endeared you to the people of Katsina. Little wonder you were recently turbaned as the ‘Dan Amanar Daura. Similarly, over the years your love for the North has remained constant as seen in your undiluted and staunch support for President Buhari.

“The saying that, ‘one good turn, deserves another comes to play at this critical moment of your political journey. We believe that if you can transform a state to a mini Nigeria where all persons irrespective of tribe and religion come to find their daily bread and live in peace and harmony, then you can transform the whole country if given the chance to navigate the
ship of Nigeria. Permit me to say, Dan Amanar Daura sir, Nigeria truly awaits your uncommon and result oriented leadership,” Sani said.