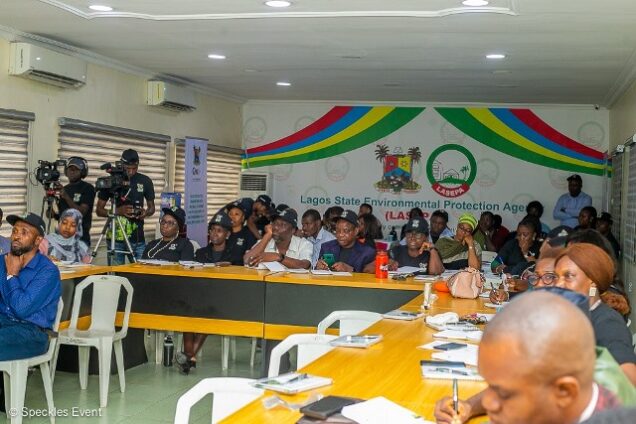 Participants at the event

At the event held at the conference room of the Lagos State Environment Protection Agency, LASEPA, the experts deliberated on the workable strategies to implement the circular economy and sensitised the stakeholders on what the policy is about, saying the nation stands to benefit immensely if the policy is fully adopted in the country.

The lead IT Consultant, Nondunna Limited, Mr. Stephen Adetutu-Oniya, took the first session on the IT solution for the project (The Circular Economy and Resilience Dashboard and Web App) while all the participants shared their experiences and understanding of the circular economy.

Speaking on the circular economy in practice, a representative of Sterling Bank, Dele Faseemo, Group Head, Renewable Energy and Power, Sterling Bank, said nothing should go to waste.

He said that both the government and organisations are concerned about making the world sustainable.

He said: “We rarely talk about the world we live in today without mentioning that word “sustainability.” It is at the forefront of every discussion, from governments to organizations, begging the question, “How can we be more sustainable?”

The world and its economies continue to grow as we inch closer to the earth’s planetary limits. According to the UN, the world population is projected to reach 9.7 billion by 2050.

Faseemo, on the other hand, stated that circular economy answers some of those sustainability questions, stating that its concept shows that the world did not have these resources in infinite quantities, that extraction and processing of these resources has a significant environmental impact, and that adopting a ‘cradle to cradle’ mindset rather than a ‘cradle to grave’ mindset (as is the case with linear economies) is the best course of action.

He added that stationary energy produced the highest share of emissions, at 14,563,211 tCO2e.

He said: “A circular economy is a regenerative system in which resource input and waste, emissions, and energy leakage are minimised by slowing, closing, and narrowing energy and material loops.

“Circular Economy also calculates that 62% of global greenhouse gas emissions (excluding those from land use and forestry) are released during the extraction, processing, and manufacturing of goods to serve society’s needs; and 38% are emitted in the delivery and use of products and services.”