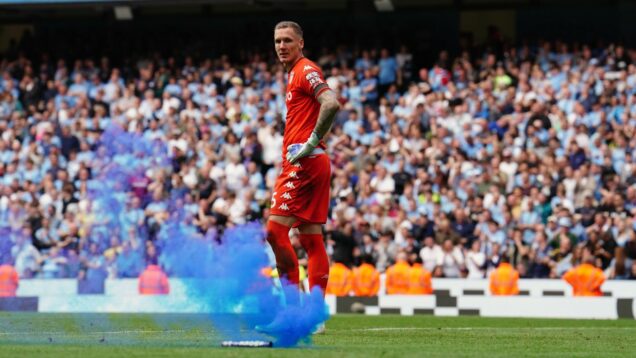 It was the latest in a series of incidents at grounds around England over the past couple of weeks.

Also, Crystal Palace manager Patrick Vieira was involved in an altercation with an Everton fan as the Toffees celebrated staying up.

Former England striker Michael Owen backed fining clubs to try to stamp out the problem, saying: “I think in general us as human beings are a little bit like sheep.

“We see it on the television, we see somebody making a pitch invasion, and all of a sudden we think, `Ah, when our team plays, we’re going to do it next’. I think as soon as we stop one set of fans doing it then most will follow.

“If they (clubs) are letting people through their turnstiles, they’ve got to be able to control those people. At the end of the day, they’re responsible. So, I think we’ve got to hold the clubs to account. Fining (them) I think is the easiest way.”

Owen admitted he would now be thinking about the possibility of being confronted by fans if he was still playing.

“All of a sudden we’re getting into a situation where I’d be looking at the clock thinking, only one minute to go, I’m almost starting to play in a position where I’m near the tunnel to get off the pitch quickly,” he said.

“You should never go to a game and feel threatened. But football is like that, it’s tribal, and, when people get together, they do things they shouldn’t do and we obviously need to stamp it out right at source.’