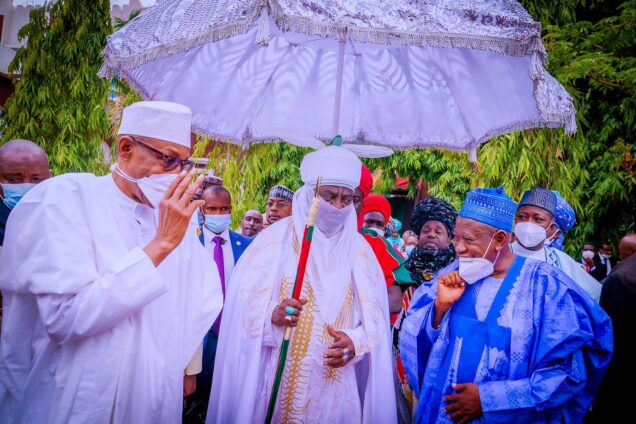 Buhari, Bayero and Ganduje during the visit

President Muhammadu Buhari was in Kano State on Monday where he visited the Emir’s Palace and condoled with victims of Kano explosion.

The president was on his way to attend the ceremonial parade to commemorate the Nigerian Air Force’s 58th anniversary, when he decided to visit the Emir’s palace.

The president met the families of victims of the explosion in Kano to express his condolences and that of the nation, describing the incident as sad and unfortunate.
The family members, accompanied by various community leaders resident in Sabon Gari Kano, including Chief Nicholas Ibekwe, the Eze Igbo, were assembled at the Palace of the Emir, His Royal Highness Alhaji Aminu Ado Bayero for the meeting with the President.
Tags:   President Muhammadu Buhari