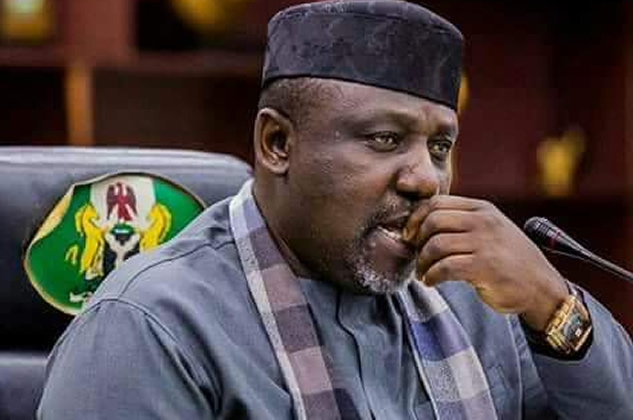 At last, operatives of the Economic and Financial Crimes Commission (EFCC) have arrested former Governor of Imo State, Rochas Okorocha at his residence.

EFCC operatives had laid siege on Okorocha’s Maitama home in a bid to arrest him and produce him in court over allegations of fraud.

Operatives of the commission and some policemen had stormed the house in a bid to arrest the former governor who was holed in his apartment.

He had said the commission was after him to prevent him from taking part in the APC’s presidential screening.

After laying siege on the house for hours, the EFCC operatives broke into Okorocha’s house after firing some shots and arrested him.

The commission had given reason why it invaded the lawmaker’s apartment through a statement issued by its spokesman, Wilson Uwajeren.
The EFCC said it besieged Okorocha’s home in a bid to effect his arrest, as the move followed the refusal of the former governor to honour invitations after jumping the administrative bail earlier granted him by the Commission.
“EFCC had on January 24, 2022 filed a 17-count criminal charge bordering on diversion of public funds and properties to the tune of N2.9billion against Okorocha.
“The case was assigned to Honourable Justice Inyang Ekwo of the Federal High Court, Abuja but attempts to arraign Senator Okorocha were twice stalled owing to the absence of the ex-governor who evaded service of processes.
“At the last adjourned date, March 28th, 2022, Justice Ekwo before adjourning until May 30th, 2022, had warned that it was “the last adjournment I shall grant in this matter”.
“In the circumstances, the Commission is left with no option than to effect the arrest of Senator Okorocha and bring him to trial,” Uwujaren said.
Tags:   efcc   Rochas Okorocha