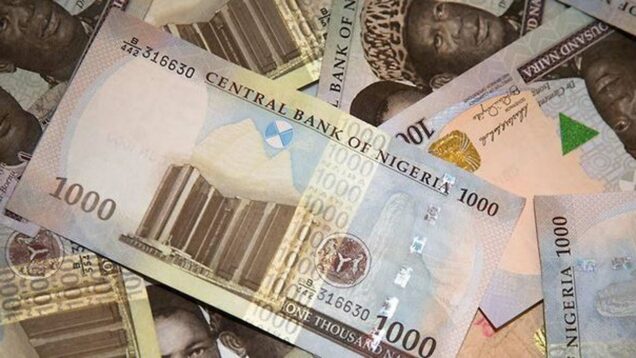 Only increased productivity and a change in consumption patterns of Nigerians will shore up the value of the naira.

This was among the consensus reached by experts at a one-day roundtable on national issues organised by Development Specs Academy (DSA) in Abuja.

Dr. Okey noted that the Central Bank of Nigeria, CBN, has made several policy interventions to improve the value of the national currency.

The bank is also said to have taken further, hands-on, measures, including the Anchor Borrowers Program, which he said created and capacitated several farmers’ cooperatives and enhanced their access to loans.

“This initiative alone has created millions of jobs, taken many youths off the crime path and rescued many local economies. Only economy-reflating and socially impactful efforts, as seen in such initiatives, in addition to consuming what we produce and producing what we consume, will give us the prospect of bringing up the value of the National Currency and keeping it up,” he said.

Brig. Usman described as unacceptable, the level of insecurity in the country and called for more strategic efforts towards ensuring the release of citizens being held in captivity by terrorists.

He also urged the government to prioritize the release of kidnapped victims including the remaining Chibok girls, Leah Sharibu, the Kaduna train victims and others.

“Government should be proactive in information dissemination about what it is doing concerning those in captivity in various parts of the country,” he said

A former secretary of the Catholic Secretariat in Nigeria, Rev Ehusani, called on youths to take advantage of their numerical strength to vote for competent Nigerians in the 2023 general election.

The roundtable with participants drawn from the civil society communities, youth-based organisations, youths in politics and social media influencers among others, warned that the country could have a looming crisis if public universities are not opened.

It also called for the promotion of vocational skills and innovative entrepreneurship and values reorientation for youths to create the right mindset that would enable them function successfully in a 21st Century world.

The Roundtable bemoaned the cost of forms for aspirants to various political offices in the country, noting that it is too high, elitist, exclusivist and seems designed to ensure that only individuals and groups with heavy war chests can contest for political office.

It proposed outright reduction in the cost of forms by over 95% and return of the balance to the aspirants, except for those of them who may wish to donate such excess to the individual parties concerned.

The forum also noted that fake news and deliberate distortion of statements of public officials are among factors compounding insecurity in the country.

The DSA Roundtable, according to the organizers, will henceforth be a monthly national event.