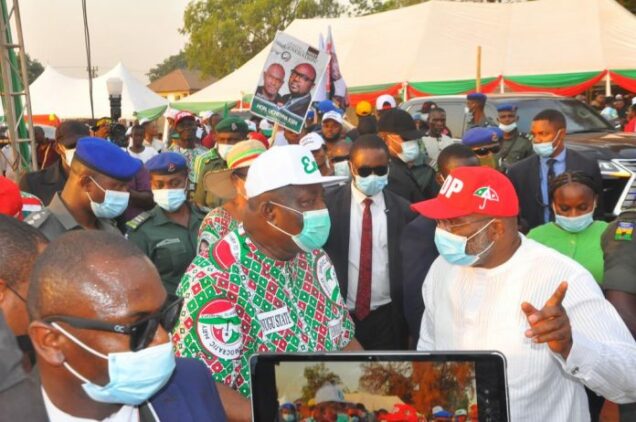 Governor Ugwuanyi and Nnamani at a PDP campaign rally

Gov. Ifeanyi Ugwuanyi of Enugu State and Sen. Chimaroke Nnamani have secured the Senatorial District primary election of the Peoples Democratic Party (PDP) held in the state on Tuesday.

However, former Gov Nnamani retained the senatorial ticket for Enugu East as he polled all the 243 votes cast at the primary election.

Meanwhile, Mr Osita Ngwu, won the PDP ticket for Enugu West Senatorial to replace Sen. Ike Ekweremadu who is vying for the governorship position in the state.

Gov. Ugwuanyi was declared winner of the peaceful election by Mr Vin Amabei, the Chairman of the PDP five-man Electoral Panel from the National Working Committee (NWC) of the PDP.

It was conducted by the PDP Enugu State three-man Electoral Panel led by the Returning Officer, Mr Tahill Ochi, before the voting exercise by the delegates.

The elections were monitored by officials of the Independent National Electoral Commission (INEC) who described it as peaceful and transparent.

In his acceptance speech, Ugwuanyi dedicated the victory to God, and went round to thank the delegates for their overwhelming support and solidarity. (NAN)