Buratai: Why I abandoned my ambassadorial post for Amaechi's campaign 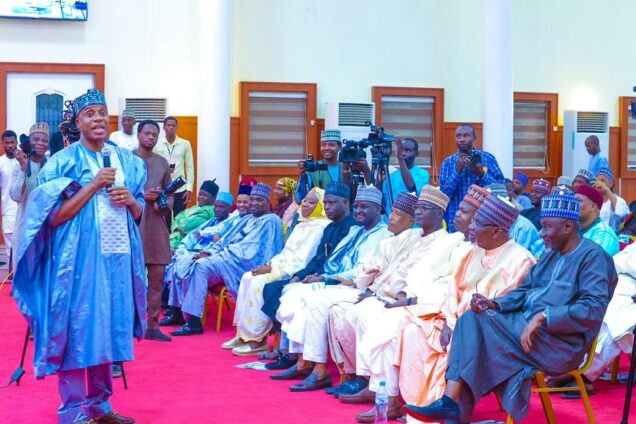 Presidential Aspirant of APC, Rotimi Amaechi, addressing leaders and delegates of the party in Yobe State during a consultative meeting at the Government House Damaturu, Monday. Sitting fourth from right on first row is Tukur Buratai

Former Chief of Army Staff and Nigeria’s Ambassador to Benin Republic, Lt. Gen. Tukur Buratai has explained why he abandoned his ambassadorial post to become part of former Minister of Transportation, Rotimi Amaechi’s campaign for the 2023 presidential ticket of the ruling All Progressives Congress, APC.

Buratai and a former Inspector General of Police, Suleiman Abba have been part of the delegation of the former minister who has been going round the country to seek the support of APC members ahead of the primaries scheduled for May 29 and 30 in Abuja.

Speaking when he accompanied Amaechi on a courtesy call on the Yobe State Governor, Mai Mala Buni in Damaturu over the weekend, Buratai said he is supporting the former Rivers State governor to become Nigeria’s next president because he has capacity and courage to fight insecurity.

He said Amaechi demonstrated the courage when he was Brigadier Commander in Rivers.

The former Chief of Army Staff added that the former minister has also shown capacity in other areas and should be supported to become Nigeria’s president in 2023.

Buratai said: “I was opportune to be the Brigade Commander in Rivers State when he served as Governor. We worked tirelessly to ensure security and he is a man of many parts.

He has also shown that capacity in other areas of administration which includes the doggedness and determination to ensure that our railway work again. What we need is to give him the delegates votes for him to get that ticket and be elected as President in 2023.

“I am part of his team because we want to champion a cause, a very worthy cause of someone who has shown capacity, who has shown leadership, who has shown the strength in terms of leadership where he started in Rivers State as Speaker of the State House of Assembly,” Buratai said.

Speaking during the courtesy call, Governor Buni said with Amaechi’s pedigree, it would only be proper for Nigerians to support him to succeed President Muhammadu Buhari.

He said the country requires someone who would continue in the implementation of the lofty policies of the present administration, hence the need to support the former Transport Minister.

“Your Excellency, you will agree with me that most of the developed nations were developed as a result of continuity of policy and programmes, unbroken chain of leadership. In Nigeria, a two-time Director General of a Presidential campaign and one of the most trusted and active member of cabinet, who has always been there for Mr. President to kickstart everything that will move the nation forward because all the campaign promises are on his fingertips, is fit.

“Like I said earlier, ordinarily you shouldn’t have come. You know we granted waiver to President Buhari in 2015 not to come, so we would have granted same to you, but as customary, you are here to interface with the delegates without taking the delegates for granted.

“Let me use this opportunity to thank you for the newly designed railway line which you took to my house. The design for the Port Harcourt-Maiduguri rail line that goes up to Goneri, from where we turn into Damaturu, and from Damaturu to Gashua, and all the other areas you have touched. The history of the Buhari government cannot be complete without your name. We, here in Yobe appreciate you and we are always in support of you, Governor Buni said.

In his own address to the delegates, Amaechi assured of improved economy, where insecurity will be a thing of the past, if elected.

Earlier, Amaechi was at the palace of Emir of Damaturu, HRH Alhaji Dr. Shehu Hashimi, the Ibn Elkanemi the 2nd who also appealed to Nigerians to support his ambition.

The Emir said, “I know much about you, I know the experience you have and the challenges you have gone through. With your track record, when you become the President, you will deliver as expected. I pray that you will be supported by Nigerians to be the President of this country.

“We will support you in prayer, we will support you in all aspects that we are able to, to see that you excel. The transformation of this great country seen under the Ministry of Transportation which you were the Minister, needs to be commended. We know the role you played and we know how much you have done, The Emir said.