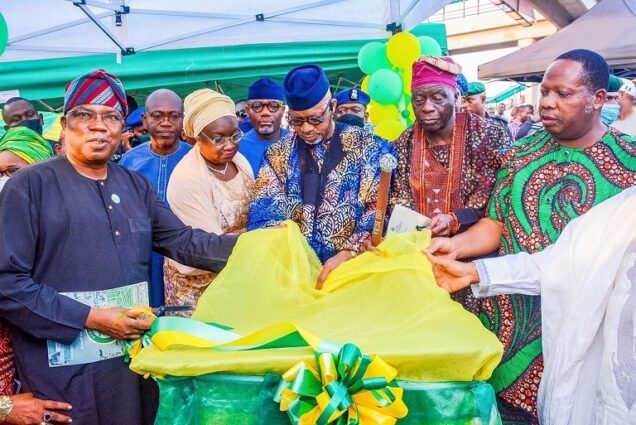 The road which traverses Abekouta South, Obafemi-Owode and Ewekoro LG, was one the projects started, but abandoned by the immediate past administration in the state.

Speaking at the inauguration ceremony at the popular Panseke Junction, Abiodun described the event as symbolic, as the road was one of the inherited projects he inherited from his predecessor’s administration.

He further described the project as fulfilment of his administration’s promise to the people of Ogun state.

“This road has a history. It was started on December, 2018. That makes it one of the inherited projects from the immediate past administration. At the inception of our administration, and, in our usual methodical, strategic and inclusive approach, we inaugurated a committee to consider the status and viability of these inherited projects. Then, I made a promise to the good people of Ogun State that we will complete all inherited projects that have direct bearing on the development of our dear State. Here we are! We are fulfilling our promises.

“Since 29th May, 2019, our dear State has witnessed a new vista in infrastructural development. We thank God that we are here gathered today not only to commission this road, but to fulfill the promise made. This is to show that our words are our bond with the people of Ogun State”, the governor noted.

Abiodun explained that the 3km road is particularly of economic importance as it traverses three Local Government Areas and also provides a viable bye pass to the busy Ita-Oshin-Lafenwa end of the Abeokuta-Ifo-Sango-Lagos expressway through Obada Oko.

“More than that, its benefits on the macro level are far greater. It is no doubt an added advantage to the successful implementation of our Transport Master Plan, especially the road transportation aspect of our multi-modal transport agenda.
This road will all boost our transportation development plan for Abeokuta as one of our fastest growing cities. As we look forward to expanding the scope of coverage of the Bus Mass Transit Scheme, the kinds of this road will make the plan easier”, Abiodun stated.

The governor noted that the people have been enjoying the benefits of the road before the official commissioning, pointing out such underlined the fact that his government is more committed to the provision of amenities that make life easier to the people than the pomp and pageantry.

While expressing elation that “Building our Future Together” Agenda of his administration for the continued development of Ogun has continued to receive both state and nation-wide acknowledgement, Abiodun reiterated that he would not make any promise he never wished to fulfill.

He added that efforts were being intensified towards ensuring reconstruction of other major roads, just as new ones were being constructed for a wholesome development of Ogun State.

“Let me also take this opportunity to plead that the Federal Government to consider the plea of our two states of Ogun and Lagos on the release and prompt approval for the reconstruction of those roads. The fact is that the argument that some roads are Federal road, as valid as it is, offers little comfort because there are no Federal citizens. Our people hardly make distinctions on the ownership of road infrastructure. In fact, they often associate States with the particular roads they ply. And, they situate their pains on particular roads with geo-space. All they want and deserve is good governance.

“On this, our administration will continue to do more for the individual prosperity of our people and development of our dear State. Let me reassure that our Administration is irrevocably committed to a continuous provision of infrastructure and security in all parts of our dear State. In this regard, the roads leading to our farm settlements, rural areas and township roads, in general, will continue to receive utmost attention to facilitate even socio-economic development of all parts of our dear State. All these will enhance our job creation, poverty alleviation and food security programme”, the governor said.

Abiodun, therefore, charged the people in Ogun State, especially the residents of Panseke-Adigbe-Opako axis, to take ownership of the road and other projects that his administration has continued to provide across the state.

“You are to protect them as they are truly yours. By doing this, you will not only partner in the successful implementation of our Administration’s “Building our Future Together” Agenda, but also in creating a viable economy for our dear state”, he noted.

While acknowledging the dedication and cooperation of all those behind the successful completion of the project, the governor sought the people’s continued support for his administration in the drive to provide more infrastructure to the benefits of all by paying their taxes and other levies regularly as and when due.