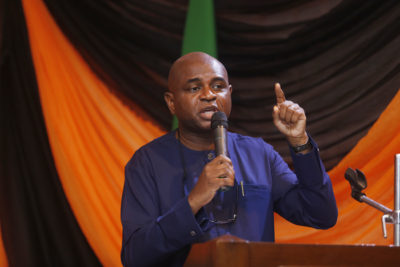 Prof Kingsley Moghalu, African Democratic Congress (ADC) presidential aspirant has warned that Nigeria will face a social revolution in the future if the growing poverty in the country is not addressed.

Moghalu who spoke at a banquet and national parley organised by the leadership of ADC for its 11 presidential aspirants therefore stressed the need to address issues of poverty and insecurity in the country to avert worst situations in the future.

The former Deputy Governor of Central Bank of Nigeria (CBN) said his fear was based on the rate of poverty and deprivation, especially amongst the downtrodden in the country.

Moghalu, who was also a former envoy of the United Nations (UN) decried the appalling level of insecurity in the country, blaming the development on poor leadership by successive governments.

He said Nigeria needed a visionary leader with the capacity to enhance nation building, national security, economic and international relations.

According to him, 2023 general elections will provide Nigerians a historic choice to turn around their fortune for the better by voting into power a purposeful and visionary leader.

He said it was regrettable that though “Nigeria was the first son of the black race, we were yet to realise our potentials as a people.

“I am running for presidency because the poverty in this country is simply too much to ignore anymore.

“And if it continues, it will lead to a social revolution, I have no doubt about it, it will happen but it’s just matter of when.

“I am running for president because of all the young people of these country who have no job, meanwhile we are having more and more children.

“One day their energies will translate into something very negative in this country”.

He said the country was currently so divided along ethnic and religious lines that it could not advance as expected.

“So, I can say that I Mogahlu is what Nigerians need to fix this country.

“In the coming general elections, we are faced with a historic choice to make. It is not just an election of politics as usual, we all have a clear choice to make.

“Everything seems to be going down. 2023 is the time to make the choice for a purposeful future.

“Yes leadership is the problem. I am that leader Nigeria needs. ADC is the party that will deliver that leadership,” Maghalu stressed.

He said the people in Asia and Europe were not better than Nigerians neither were they created differently by God.

He added that he would change the narrative by ensuring improved well-being for Nigerians if he became the country’s next president in 2023.

Dr Chike Okogwu, also an ADC presidential aspirant, decried the apathy by the elites towards active participation in political activities in the country.

He said the situation had thrown up those he termed as “brigands” occupying various elective seats to the detriment of Nigerians.

Okogwu stressed the need for the country’s elites to actively participate in politics and in the electioneering process, to reclaim their rightful place in governance.