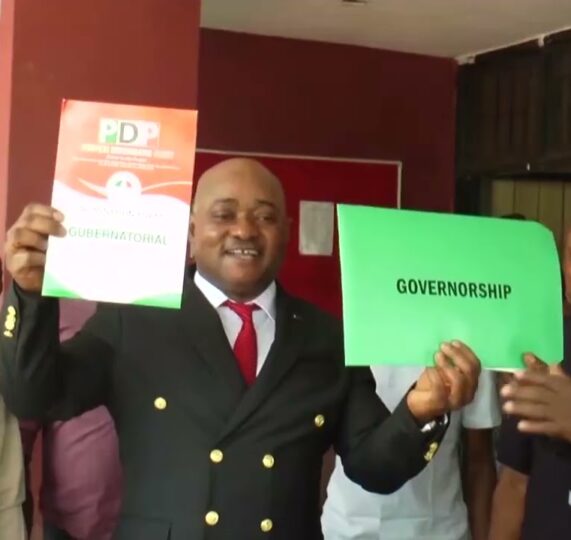 A Cross Rivers State governorship aspirant in the 2023 election on the platform of People Democratic Party, PDP Amb. Wilfred Bonse, has announced his withdrawals from the race while asking the party to refund the N21 million he used to procure gubernatorial forms.

The governorship aspirant said he is withdrawing from the race as the Cross River chapter of PDP had refused to disqualify or clear him to contest the party’s primary election scheduled for Wednesday.

He added that he had also made his request known in a letter and submitted to the National Chairman, PDP, Sen. Iyorchia Ayu, which was received, acknowledged at the party’s national secretariat, Abuja.

In the letter which was sighted by NAN, said he was withdrawing to contest the election on the platform of another party, as all avenues to seek justice in PDP proved abortive in an obvious attempt to deny him participation in the primary.

“Having exhausted all avenues of consultation and appeal within the party without success, I am withdrawing my ambition to contest for gubernatorial election for Cross River State on the platform of PDP.

“I had hope in view of the PDP ‘New Generation Operation Rescue Nigeria, Join the PDP Mantra for a level-playing field that will see the emergence of the best man for the job.

“An individual that will swing power from the hands of the ruling APC to PDP in Cross River State, but going by my experience. I was obviously wrong.

“That is why I requested for a full refund of all sums paid by me in respect of my botched expression of interest and nomination forms for participating in the primaries of the party totaling N21,000,000,” the letter stated.

The letter was titled, “Notice of Withdrawal of Interest to Participate in the Governorship Primaries of Cross River State”.

But according to an official of the party, the fee for nomination and expression of interest forms are non refundable.

Bonse in Abuja on linked his demand to “unfair treatment” from the party to deny him participating in the forthcoming governorship primary in Cross River.

“I am requesting the party to refund the sum of N21 million I paid for the expression of interest and nomination forms I bought.

“If I had, for instance, been given a fair chance to participate in the primary, and I lost, I will not have had an issue. But then, I am being stonewalled at every point.

“A Board of Trustees (BOT) member has given letter to PDP, urging them to reconsider my issue in order not for the party to lose governorship election in the state considering my pedigree.

“But it has fallen on deaf ears and the time is very close. As I speak, we have less than seven days to the primaries.

“The new Electoral Act provides for clearance to be done seven days to the primary and my name to be sent to the Independent National Electoral Commission (INEC).

“So, my understanding of what is happening is not something I probably want to say on camera, but it is obvious that certain persons are seriously intimidated by my candidacy.

“They are playing some underhand games to try to stall me from participating in the primary.

He disclosed that he would be seeking his ambition on other more “commodious political party platform”.

Asked if he was invited for the party’s screening, Bonse said ‘yes’.

He added that at the point of screening, he was requested to provide his receipts of tax clearance certificate, voters card and birth certificate with court attestation, which he presented.

He said the screening committee also requested for his National Youth Service Corps (NYSC) discharge certificate, which he explained that he had already requested for and NYSC assured him it would be processed as soon as its portal was opened.

“But they had hung upon that particular point, just kept us down to the point where it is becoming very ridiculous to say the very least,” Bonse said.

On his next line of action, Bonse said it would be communicated in the next 24 hours, adding that he was consulting with stakeholders.