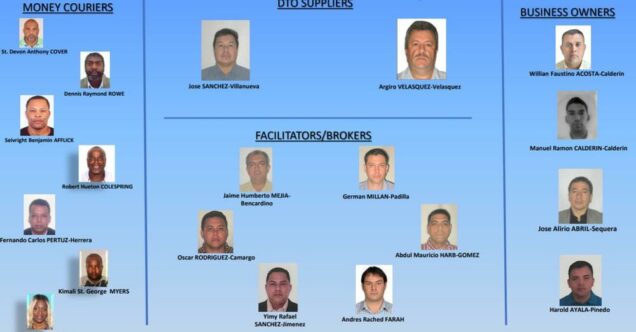 The network of money laundering by Colombian cocaine cartel

Nineteen people have been indicted in a complex money laundering scheme to move millions of dollars in drug proceeds from Colombian cartels through U.S. banks, federal prosecutors said Tuesday.

The charges brought in Massachusetts federal court are the result of a five-year investigation into the money laundering organisation based in Colombia.

Authorities said they laundered at least $6 million through the U.S. banking system.

Last month, another person was arrested in Florida and 12 others were arrested in Colombia.

Prosecutors are seeking the extradition of the Colombian and Jamaican defendants to the U.S., officials said.

One person remains at large.

“If nothing else, this case shows that the long arm of the law does not stop at our borders,” said Joleen Simpson, special agent in charge of the Internal Revenue Service’s Criminal Investigations in Boston.

Those charged played a variety of roles in the conspiracy, including drug suppliers and dollar purchasers, Massachusetts U.S. Attorney Rachael Rollins told reporters.

The scheme involved the use of so-called “peso brokers,” who agreed to give pesos to drug traffickers in exchange for the profits of U.S. drug sales, Rollins said.

Criminal associates would be handed drug money in suitcases or bags on the street and then peso brokers deposited the funds into U.S. banks, Rollins said.

To make it appear like it was legitimate business activity, the money was deposited into bank accounts held by front companies and individuals or through multiple small deposits into different bank accounts, officials said.

Nearly 3,000 kilograms (6,600 pounds) of seized cocaine — with a street value of more than $90 million — have been traced back to the money laundering organization, Rollins said.