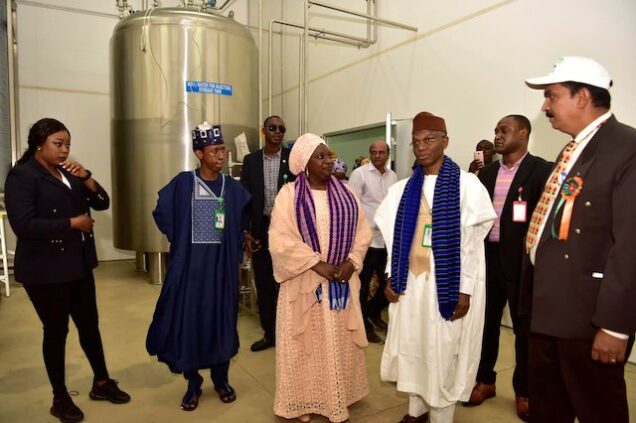 El-Rufai and deputy governor Hadiza at the AMA Medical plant

He said at the event that health investment is very close to the heart of his administration.

The governor congratulated the management and members of AMA pharmaceutical for the great achievement and for investing in the state.

El-Rufai also thanked the management of the Kaduna Investment Promotion Agency (KADIPA) and its team for attracting high-value investors into the state.

According to him, this will create jobs for the youth.

Mr. Venka Taraman-S, the representative of AMA medicals, said the company was the first IV fluid manufacturing organization in Northern Nigeria and had a production capacity of 36 million bags of IV fluid per annum.

He said the company was positioned to become a world-class medical manufacturing business with a state-of-the-art factory that would boost the production of medical equipment of high international standards.

According to him, Kaduna state was chosen for the location of the company as a commercial centre of the North-west, strategically connected with most states in the North.

He said the company would offer job opportunities to over 200 indigenes in the state, adding that it’s a firm belief that the number will increase as business expanded in the state.

The ultra-modern facility, which is situated on Nnamdi Azikiwe Express Way, will produce Intravenous fluid and other products for the Nigerian pharmaceutical industry.