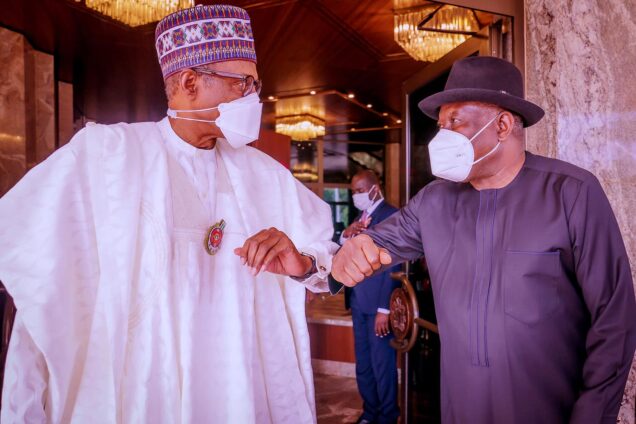 Former President Goodluck Jonathan has recommended the removal of Section 84 of the new Electoral Act, to allow political parties to decide modalities for candidates’ elections.

Section 84(12) reads: “No political appointee at any level shall be a voting delegate or be voted for at the convention or congress of any political party for the purpose of the nomination of candidates for any election.”

President Muhammadu Buhari had also expressed his reservation about the section of the electoral act.

The President through the Minister of Justice, Abubakar Malami, also filed a suit seeking to nullify the section.

However, Jonathan gave his support for the removal of the section at the public presentation of a book titled “Political Party Governance” by former Minister of State Power, Dr. Mohammed Wakil, on Thursday in Abuja.

The former president said that the National Assembly should allow political parties to have the leverage of doing certain things differently, as their needs were different.

“Give parties the leverage. The key thing is that the Independent National Electoral Commission (INEC), is regulating them.

“They mentor them, and the system they will adopt in selecting their candidates must be documented in their constitution and copies deposited with INEC. That is what will be used to judge that party.

“Parties are not parastatals of government and the National Assembly cannot make laws that choke the political parties. That is my take on this controversial issue,” he said.

Jonathan also rated as low, the ongoing primaries by political parties to elect candidates for the 2023 General Elections because of provisions of the 2022 Electoral Act.

He said that the primary where only elected delegates were allowed to elect candidates, was already a failed process.

“The National Assembly made alterations to the Electoral Law, and now only what they call the `elected delegates’ are to elect people that would vote. Then one day Nigerians will go to the polls and think they are voting a president?.

“But who presented presidential candidates for you? Very few people at the national level, at the state level, at the local districts, at the federal and state constituencies.”

Jonathan cited a Federal Constituency in Bayelsa State with only two wards and just only six delegates that elected PDP candidates because every ward had three elected delegates.

Jonathan said the situation was even more worrisome when the delegates were unknown figures in society.

“A delegate that will come to Abuja to select who becomes the presidential candidate. Is that the kind of democracy we will practice?

“But those of us who have been involved know that it is terrible. Are we bringing those who really know who is who to elect these delegates or those delegates that can be bought over with money?”

Jonathan advised the National Assembly to make laws that would help solve problems, not those that were irrelevant or designed to create problems.

“And laws must be made assuming those who are making the law are blind to any interest just like the judges, who rely on only the scale and the sword.

“Laws must not be made to target a group of individuals or an individual.

“And when you go into that system of making laws, you will make this terrible mistake that messes things up like the primaries that are going on now.

“I think we should rather think about institutionalized democracy and make it as our culture,” he said.

Jonathan also decried situations where those contesting openly shared money and gift, saying those actions should be criminalized.

“In some countries, you cannot give a gift like what we normally do here; we give bags of rice with photographs of candidates and other tangibles.

“We distribute them freely. That is a criminal offense and we expect the National Assembly to make laws to criminalize that.”

He added that President Muhammadu Buhari should not be blamed for delaying assent to that amended section of the bill.

Jonathan noted that there were lots of processes a bill must pass through before the president could sign.

He said the document was supposed to go through a drafting process in the National Assembly with all their committees and joint committees.

The former president added that when the draft was ready, the speaker and senate president, as well as executive aides, would take a look at it.

“That is the bureaucracy so that the President does not make mistakes.

“So nobody should expect the President to wake up and just sign. It must go through a process.

“People must do their work in this country, you cannot just be taking money and be sleeping. This is a wake-up call to the National Assembly,“ Jonathan added.