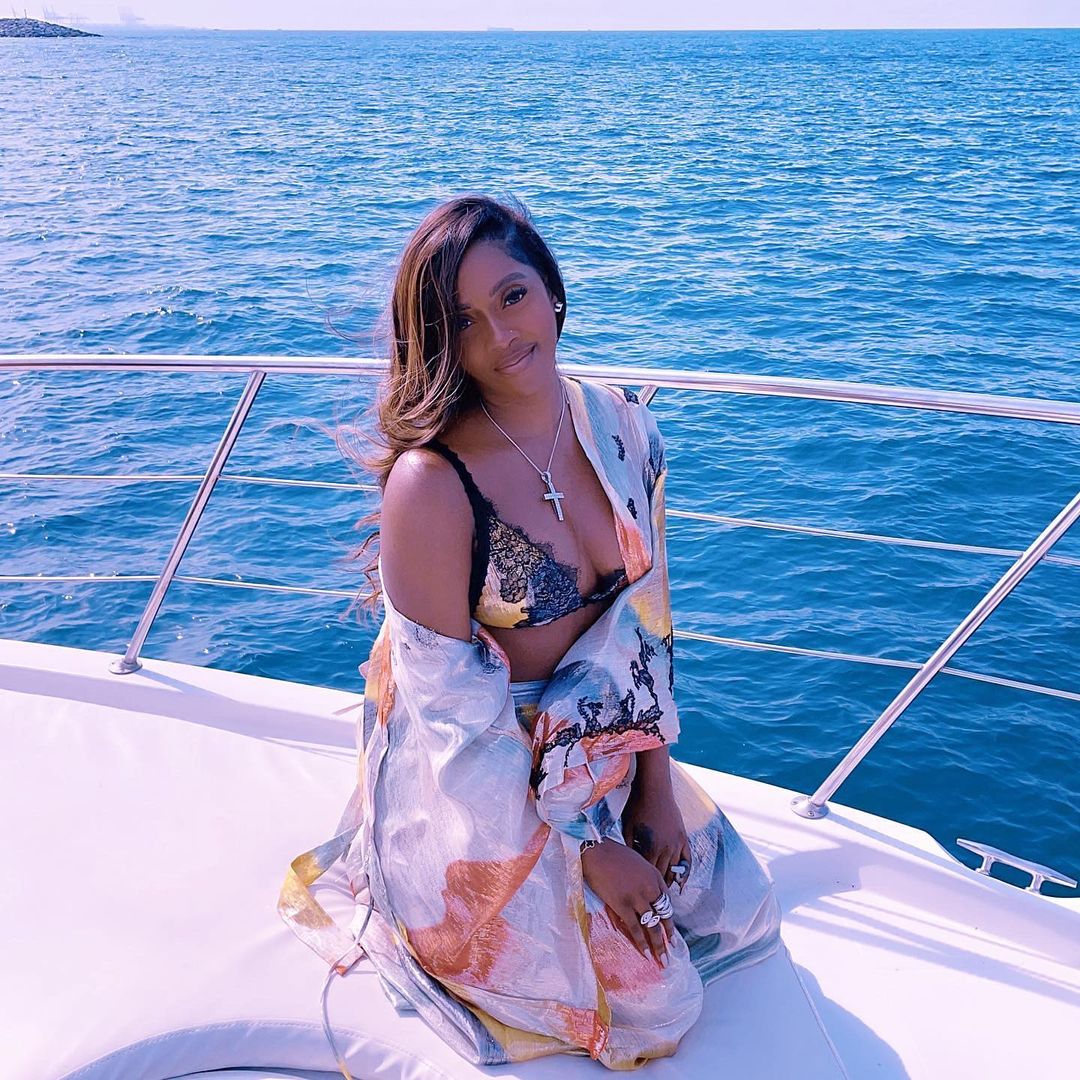 Tiwa Savage on a yatcht

Afrobeat beats queen Tiwa Savage is well-endowed in all ramifications. She is rich, superbly talented, has a body, cleavages and looks that men not only fawn over but are ready to die for.

And she makes social capital from them. But she is also fighting her demons, which many haven’t taken cognizance of or are treating with kid gloves. She craves those demons too, the way children crave lollipops.

“Don’t be too hard on yourself, we are not perfect but God is,” she, dressed in a bikini on a yacht, once said as she bares her cleavages.

Savage is never hard on herself. She gives it to them whenever she feels like trending. She continues to give it to them and has trended in no small measure. What with her appearing almost completely nude a number of times.

What with her fiery sense of fashion, the salacious photos of which she uploads every now and then. What with her craziness, her sassiness and her do-it-in-your- face ‘killer instincts.’ What with her leaked sex video the plot of which she hatched with her boyfriend on a love trip to Ghana on a yacht.

However that leaked sex video, which controversial OAP Daddy Freeze famously described as 10 powerful seconds was the icing in the cake baked with those dangerous obsessions. It was the culmination of years spent in vain toils to be relevant, to etch herself in the consciousness of others.

She had not showcase her ‘baddest’ sense of fashion several times for nothing, that bad girl persona. She had not appeared completely nude many times for nothing. She was only bidding her time, waiting to explode, which she did on that unforgettable 19 October, 2021.

Still, one of her dangerous obsessions which is also connected to the leaked sex video is her undying love to cruise on yachts. Many of her excesses and hankering to be in the spotlight, to live the good life, revolve around yachts. It would be recalled that just before that sex video was allegedly leaked, Savage was seen with friends cruising on a yacht.

Many believe that it was on that same yacht that that 10 powerful seconds took place as the backgrounds are similar. And just after the sex video leaked, Savage went back to her habit once again and gorgeously dressed, was partying with friends on a yacht.

She took to Instagram to share beautiful photos of herself having a pleasant time with those friends and bragged about going on vacation twice a year. She wrote: Mood: 6months vacation, twice a year, which made many raise concerns about the yacht, advising her to be careful to avoid another shifting of pants, as it were. “When I see yacht, I remember bad things ❤️❤️❤️” — @gen2g commented. “No allow them shift your pant post again for boat o”—@xx_rhiyad also said.

However, those weren’t the only times Savage had frolicked on yachts. She had done what many regards as her Achilles heels many times. Her wedding to her ex, Illbliss, was supposed to have been done on a yacht in 2014, if it had not crashed prior to that wedding.

The following year she had a baby shower on billionaire Femi Otedola’s yacht in the company of friends such as Annie Idibia, Lami Philips, Lola Omotayo, Wizkid’s Tania, Eku Edewor, Toke Makinwa, Freda Francis, Anita Uwagbale-Iseghoh, all dressed in an all-white sailor-themed outfit.

”I loved every moment of my baby shower. The decor, the theme, my friends and all the love for mummy and baby,” the then mum-to- be wrote.

In June 2016, after her marriage had crashed, Savage again hosted a party on a yacht to celebrate her album in Durban, South Africa with the likes of AY, Juliet Ibrahim, Dotun Cool FM and several others.

The truth is, Savage has been seen many times cruising on yachts. It’s one of her pastimes she enjoys doing with reckless abandon, showcasing not just her cleavages but also her fashion sense and her morbid inclination to be in the spotlight all the time. They all join, as they in Pidgin.

When next you see the number one African bad girl on a yacht, take a look carefully. It is either something has happened, is about to happen or is already happening. There are indeed no dull moments with Savage, the undisputed queen of Afrobeats.