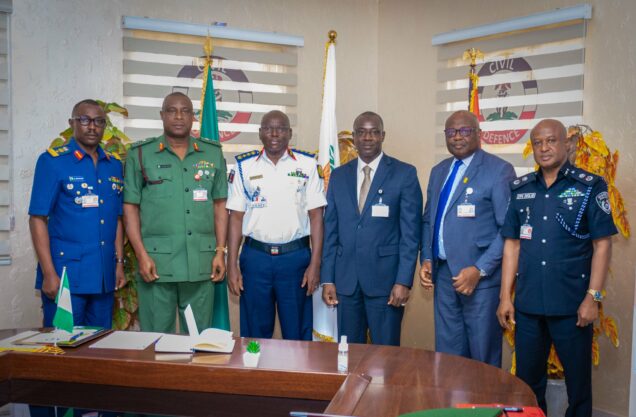 The Nigeria Security and Civil Defence Corps (NSCDC), has pledged its support to the retrieval of illicit arms in the country.

The Commandant General of NSCDC, Ahmed Abubakar Audi, PhD, mni, stated this when he played host to members of the National Center for the Control of Small Arms and Light Weapons, led by the National Coordinator, Major General Mohammed Dikko, Rtd.

He attributed the current security challenges the Nation is battling to the proliferation of illegal arms in the hands of unauthorized persons.

According to the Commandant General, the proliferation of illegal weapons in the country has resulted in the carnage ongoing in some parts of the country.

“There is a need for all security agencies to come together to fashion out new strategies to address this menace, we have to stop the smuggling in of weapons and clean up the system by mopping up the ones already in circulation.
For us in the NSCDC, we are ready to key into the programmes of the National Center for the Control of Small Arms and Light Weapons because we are partners in progress”. The Commandant General added.

He applauded the contribution of the Centre to National Security and assured of a more robust relationship with the center.

Dr Audi emphasized that it was in recognition of the center’s mandate and credibility that the Corps handed over the cache of arms recovered in Imo State from a criminal hideout which include 34 foreign-made semi-automatic guns, 27 double-barrel guns, 5 pump actions, 2 sniper rifles and 15 sets of gun cleaning kits.

The National Coordinator of the Centre, Major General (Rtd) Muhammed Dikko, in his remarks described NSCDC as a frontline agency in internal security.

He commended its performance in the country and expressed satisfaction at the Corps recovery and handover of arms to its branch in Imo State.

Major Dikko promised to continue to work hand in hand with the NSCDC and other security agencies to retrieve and stop the flow of weapons into the country.

He described the proliferation of illicit arms as a huge challenge to our collective security which must be tackled head-on.