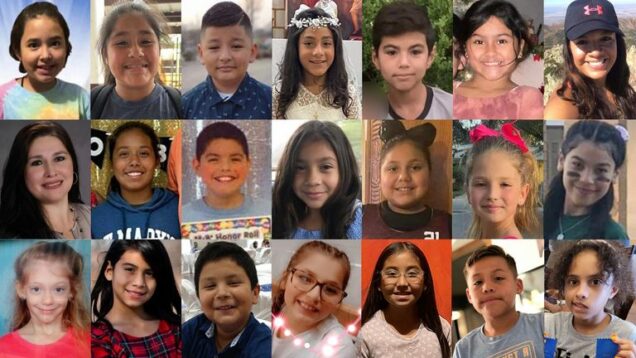 The police response to Tuesday’s Texas school massacre came under increasing scrutiny on Friday, a day after authorities acknowledged more than an hour passed before the police challenged the shooter Salvador Ramos.

Ramos entered the building and killed 19 children and two teachers inside their classroom while barricading himself inside.

Even as the shooting – the deadliest U.S. school attack in nearly a decade – intensified the long-standing national debate over gun laws, the National Rifle Association, the country’s leading gun rights advocacy group, opened its annual meeting on Friday in Houston.

Prominent Republicans, including former President Donald Trump and U.S. Senator Ted Cruz of Texas, were expected to address the convention.

Republican Texas Governor Greg Abbott, who had also been scheduled to speak, will instead provide recorded remarks and head to Uvalde, the site of the shooting, for an afternoon news conference with other officials, according to news outlets.

President Joe Biden, a Democrat who has urged Congress to approve new gun restrictions, will visit Uvalde on Sunday.

Authorities on Thursday provided fresh details about the assault carried out by 18-year-old Ramos at Robb Elementary School in Uvalde, a community of 16,000 people about 80 miles (130 km) west of San Antonio.

The new timeline, which differed sharply from some previous official accounts of the shooting, fuelled new questions about whether police had an opportunity to intervene sooner.

Videos emerged earlier on Thursday showing desperate parents outside the school during the attack pleading with officers to storm the building, with some having to be restrained.

At a Thursday news briefing, Texas Department of Public Safety spokesperson Victor Escalon said preliminary reports that Ramos had encountered a school police officer after crashing his pickup truck near the building were wrong.

Instead, Ramos scaled a fence and entered through an unlocked door around 11:40 a.m. (1640 GMT), 12 minutes after the crash. The door, which is normally locked, may have been left open to accommodate parents who were attending an awards day, according to Miguel Cerrillo, the father of a third-grader at the school.

The shooter barricaded himself inside the connecting classrooms of his victims, mostly 9- and 10-year-olds, for an hour before a U.S. Border Patrol tactical team breached the room and fatally shot him, Escalon said. read more

The interval before agents stormed in appeared to be at odds with an approach adopted by law enforcement agencies to confront “active shooters” at schools immediately to stop bloodshed.

Asked whether police should have made entry sooner, Escalon answered, “That’s a tough question,” adding that the investigation was still unfolding.

Law enforcement officials are due to give another news briefing on Friday.

The human toll deepened with news that the husband of one of the slain teachers died of a heart attack on Thursday while preparing for his wife’s funeral.