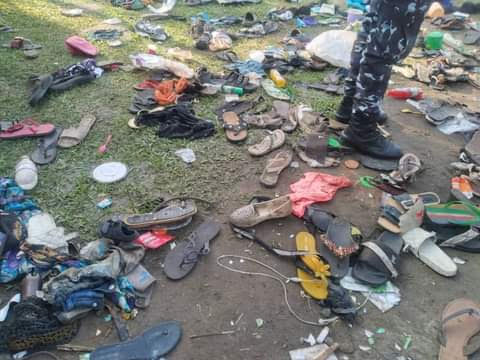 Footwears discovered after the stampede

At least 31 people have reportedly died during a stampede at the Port Harcourt Polo Club while rushing to get giveaways from Kings Assembly International Church’s Free shopping programme.

The programme is aimed at helping the less privileged in society.

Eyewitnesses said thousands of people gathered at the venue as early as 2.000am and were trying to force their way into the premises resulting in a stampede and deaths.

“A nursing mother with her newborn baby of about four months were victims. I had to leave the event when I saw the increasing number of people rushing to get things free. There was no crowd control. Ambulances, policemen and other security agencies have been rushing the injured and evacuating the dead bodies at the scene,” a nursing mother said.

The programme, titled ‘Shop for Free,’ was organized to help the less privileged get gifts and other items free of charge.

As of the time of filing this report, over 3o dead bodies have been counted so far, including a pregnant lady and three children.

The ugly incident occurred when the organizers of the programme failed to adequately control the crowd who tried to force their way into the venue, thereby causing a serious stampede which resulted in a loss of lives.

Although the Kings Assembly International Church, Port Harcourt has not reacted to the unfortunate incident, it was learnt some of top elders of the church have been arrested and detained at the Olu Obasanjo Police Division.

Among the church officials arrested were the organisers of the programme, including the Church Legal Adviser.

A mobile policeman was also disarmed by the Olu-Obasanjo Police Station as it was discovered that the officer was on “illegal” duty.

A pregnant woman and her three children were among the dead.

Other people who were injured were rushed to the hospital.

When contacted, the Rivers State Police Command’s spokesman, DSP Grace Woyengikuro Iringe-Koko, confirmed the tragedy and that 31 people died during the stampede.

She said many other people were injured and that the command was still investigating the matter.