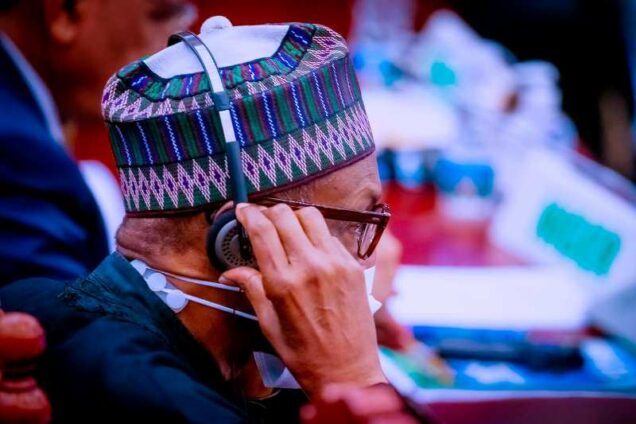 President Muhammadu Buhari has endorsed the recommendation of setting up an African Standby Force on Terrorism.

He stated this on Saturday at the 16th African Union Extra-ordinary Session of the Assembly of the African Union on Terrorism and Violent Extremism in Africa.

Buhari called on leaders to muster the political will that would fuel synergy, enhance intelligence gathering and bring more urgency to tackling violent crimes.

The president said resources meant for the development of countries had been channelled into fighting violent crimes, leaving many governments with fewer options for investing in people to meet the targets of Sustainable Development Goals.

Following the presentation of a report on Terrorism and Violent Extremism in Africa at the meeting, Buhari highlighted four items on the recommendation for immediate action.

”In the West African region, we are working very hard through the instrumentality of ECOWAS to combat terrorism.

”The Multi-National Joint Task Force in the Lake Chad region and the G5 in the Sahel have continued to degrade the insurgents by substantially reducing their capacity to inflict harm on our citizens.

”It is for this reason, Mr Chairperson, that we endorse the key recommendations contained in your report. Some of the recommendations which we believe should be implemented immediately include;

“Increasing troop levels in situations of combating terrorism, and enhancing intelligence capabilities of deployed troops, including improving the operational cooperation of contingents in the operation areas;

“Ensuring the readiness of the African Standby Force for immediate response when a Member State is under terrorist threat;

“Strengthening the fight against cybercrime, money laundering, drugs and arms trafficking, smuggling of persons and counterfeit goods, which facilitate terrorist financing; and

“Ensuring that specialized institutions, like the African Centre for the Study and Research on Terrorism and AFRIPOL, are adequately resourced in order for them to effectively discharge their mandate,’’ he said.

More than validating the report on terrorism, the President underscored the need for political will to forge a “Coordinated Continental Approach to tackling insecurity.’’

”It is for this reason, that we commend the Chairperson of the Commission for his comprehensive report on Terrorism and Violent Extremism in Africa.

”The report is very enriching, resonating, and it behoves us as the Assembly of the African Union to show the political will and forge a Coordinated Continental Approach to tackling insecurity, as we must entrench peace and stability on our continent,’’ he added.

According to the president, the recommendations, if implemented, will go a long way in increasing the capacity of affected States to respond to the threats posed by terrorists and violent extremists in their respective countries.

“Your Excellencies, this summit affords us yet another opportunity as leaders of the continent to rub minds and take far-reaching decisions to address the challenges of terrorism and violent extremism on our continent.

“The activities of these sinister groups have not only led to the loss of valuable lives and property.

“They have equally taken a drastic toll on our national economies. The capacity of Governments to address infrastructural needs and other developmental challenges, in line with our Sustainable Development Goals, is grossly diminished.

“The resources meant for developmental programmes are being channelled to fight terrorists and violent extremists, who are currently rampaging our continent,’’ he said.

The Commission Reports on the Prevention and Combating of Terrorism and Violent Extremism and on Unconstitutional Changes of Government in Africa were presented by the Chairperson of the African Union Commission, Moussa Faki Mahamat.

The report looked at persistent threats, evaluated current response mechanisms, and decided on the specific actions and measures necessary to strengthen the collective security of the Member States facing terrorism and violent extremism.

The report also recommended actionable measures needed to stem the upsurge on the continent.