Courtois voted Player of the Match in Champions League final 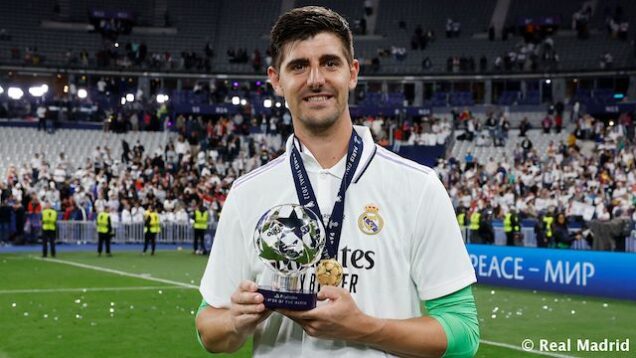 Real Madrid keeper Thibaut Courtois was voted Player of the Match in the Champions League final in Paris on Saturday.

The UEFA technical team, which made the decision praised the Belgian’s “crucial saves at critical moments during the first half.

“He also made an extraordinary save to deny Salah at the end”, the technical team noted.

“It’s been so many years, so much work, coming to the club of my dreams. I told the press yesterday that Madrid would win because of their history. A lot of people criticised me, but today we’ve shown again who are the kings of Europe”, Courtois said.

“I feel good this year. We’ve done a great job. Once you make the first save you focus and later I saved one from Mané and Salah. Nobody was going to take my desire to win the Champions League away from me today.

“I was going to do whatever it would take to win it. My family, my girlfriend and my children are here with me. I’m just sorry for my brother, who is getting married tomorrow and couldn’t be here. I’ll be at the civil ceremony on Monday.”

“The one from the Salah, because I really had to stretch for it and got enough on it to put it onto the post and know where the ball was going to rebound.

“It’s been incredible and I can’t believe it. To make matters worse, the referee added five minutes of injury time when nothing had happened, but we held out.”