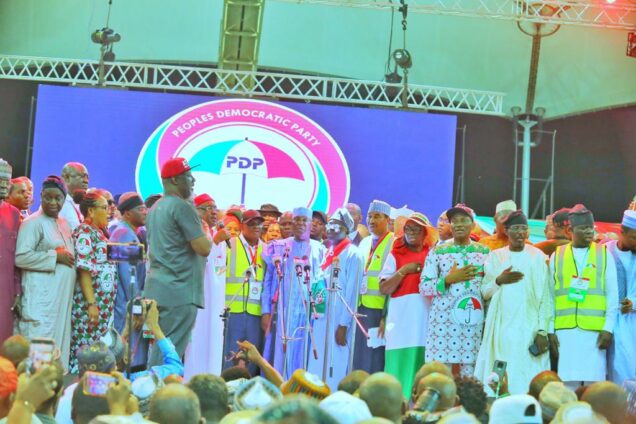 National Chairman of the Peoples Democratic Party Iyorchia Ayu and Sen. Nicholas Tofowomo have congratulated former Vice President Atiku Abubakar on his victory as the presidential flag bearer of their party.

Ayu in a statement issued on Sunday kept it short and simple.

He said: “Congratulations Atiku on your emergence as the flag bearer of our great party PDP for the 2023 general elections.”

Tofowomo, on his part, said that Atiku’s emergence as PDP Presidential candidate was well deserved.

He said that Atiku’s support for him during his senatorial ambition in Ondo South in 2019 was unwavering and well appreciated.

Tofowomo said: “As such, he needs to be paid back to ensure he emerges Nigeria’s President in the 2023 general elections.

“I congratulate Atiku on his declaration as the presidential candidate of our great party and the victory is well deserved.

“Atiku contributed immensely to my election in 2019, his support for my election is one of the many memories I will forever treasure being part of my personal experiences.

“This is the right time to pay back by supporting him ahead of the 2023 election.

“I want to assure him that Ondo South will vote massively for him to become President to chat Nigeria on the path to stability, growth, and prosperity by restoring the unity and security challenges of the country.”