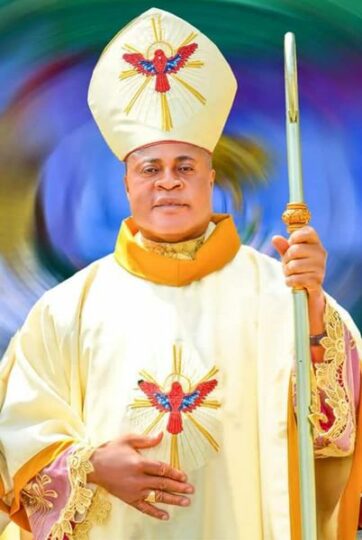 Pope Francis has named Nigeria’s Bishop Peter Ebere Okpaleke as a cardinal, along with 20 others drawn mostly outside of Europe.

Okpaleke, the fiercely rejected bishop of Ahiara in Imo, is at present bishop of Ekwulobia in Anambra state.

Cardinals have dominated Catholic hierarchy for most of the church’s history and they are the group of people who might someday elect the next pontiff.

Sixteen of those who will receive the prestigious red cardinal’s hat from Francis in a consistory ceremony at the Vatican on Aug. 27 are younger than 80.

He and others would be eligible to vote for Pope Francis successor if a conclave — in which pontiffs are secretly elected — were to be held.

Francis read out the names of his choices after delivering traditional Sunday remarks from an open window of the Apostolic Palace to the public in St. Peter’s Square.

Among those tapped by the pontiff to receive the prestigious red hat will be two prelates from India and one each from Mongolia, Ghana, Nigeria, Singapore, East Timor, Paraguay, and Brazil, in keeping with Francis’ determination to have church leaders reflect the global face of the Catholic church.

In addition to those churchmen, also under 80 and eligible to vote in a conclave are three prelates who work at the Vatican: Arthur Roche of Britain, prefect of the Congregation for Divine Worship and Discipline of the Sacraments;

Pope Francis in his choices kept up a tradition of naming some who are too old to vote in a conclave, but whose long decades of dedication to the Catholic church is honored by bestowing cardinal’s rank on them.

Others are Arrigo Miglio, emeritus archbishop of Cagliari, Sardinia; the Rev. Gianfranco Ghirlanda, a Jesuit professor of theology; and Fortunato Frezza, canon of St. Peter’s Basilica.

With church growth largely stagnant or at best sluggish in much of Europe and North America, the Vatican has been attentive to its flock to developing countries, including in Africa, where the number of faithful has been growing in recent decades.

This is the eighth batch of cardinals that Francis has named since becoming pontiff in 2013.

A sizeable majority of those who are eligible to vote in a conclave were appointed by him, increasing the likelihood that they will choose as his successor someone who shares his papacy’s priorities, including attention to those living on society’s margins and to environmental crises.

A total of 131 cardinals would be young enough to elect a pope once the new batch are included, while the number of cardinals too old to vote will rise to 96.

Pontiffs traditionally have chosen their closest advisors and collaborators at the Vatican from among the ranks of cardinals, who have been dubbed the “princes of the church.”

Okpaleke was born 1 March 1963 in Amesi in Anambra State. After his primary and secondary education, in 1983 he entered the Bigard Memorial Major Seminary in Ikot-Ekpene and Enugu.

After his ordination, Okpaleke filled a wide variety of pastoral and administrative positions.

He also studied canon law in Rome at the Pontifical University of the Holy Cross.

His appointed was resisted by the local clergy and laity because he does not come from the area. The opponents insisted on an Mbaise bishop.

The Pope thereafter took the decision to instal him as Bishop of Ekwulobia, in his home state of Anambra.

Okpaleke has been Bishop of Ekwulobia since 29 April 2020. He will become a cardinal at a consistory scheduled for 27 August.

He is the fifth Nigerian to be named a cardinal.

The first was late Dominic Ignatius Ekandem who became a cardinal in 1976.

Others are Cardinals Francis Arinze, who is now 89 years old. Olubunmi Okogie, 85, and John Olorunfemi Onaiyekan, 78.