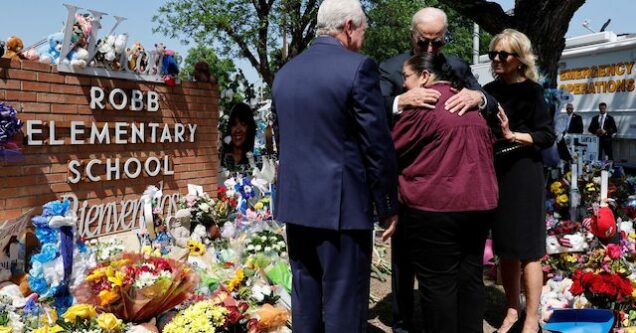 The U.S. Department of Justice (DOJ) has announced a review of the response by local and federal authorities to last week’s school shooting at an elementary school in Uvalde, Texas

In a statement on Sunday, DOJ spokesperson Anthony Coley said that Uvalde Mayor Don McLaughlin had asked the department to conduct a Critical Incident Review.

Coley also said that the DOJ’s Office of Community Oriented Policing will handle the investigation.

“The goal of the review is to provide an independent account of law enforcement actions and responses that day, and to identify lessons learned and best practices to help first responders prepare for and respond to active shooter events,” Coley said.

“The review will be conducted with the Department’s Office of Community Oriented Policing.”

“As with prior Justice Department after-action reviews of mass shootings and other critical incidents, this assessment will be fair, transparent, and independent,” Coley added.

“The Justice Department will publish a report with its findings at the conclusion of its review.”

The review comes as President Joe Biden arrived Uvalde to sympathise with families of the 19 school children and two teachers killed by gunman Salvador Ramos.

President Joe Biden landed in the Texas town of Uvalde on Sunday to comfort families ripped apart by the worst U.S. school shooting in a decade.

His visit also coincided with public demands for an inquiry about why local police failed to act swiftly.

There was mounting anger over the decision by local law enforcement agencies in Uvalde to allow the shooter to remain in a classroom for nearly an hour while officers waited in the hallway and children inside the room made panicked 911 calls for help.

Biden met with victims’ families, survivors and first responders, attended a church service and visited a memorial erected at the Robb Elementary School.

Police say the gunman, 18-year-old Salvador Ramos, entered the school with an AR-15 semi-automatic rifle after earlier killing his grandmother at the house they shared.

Official accounts of how police responded to the shooting have flip-flopped wildly, with calls mounting for an independent probe, which the DOJ has now taken up.