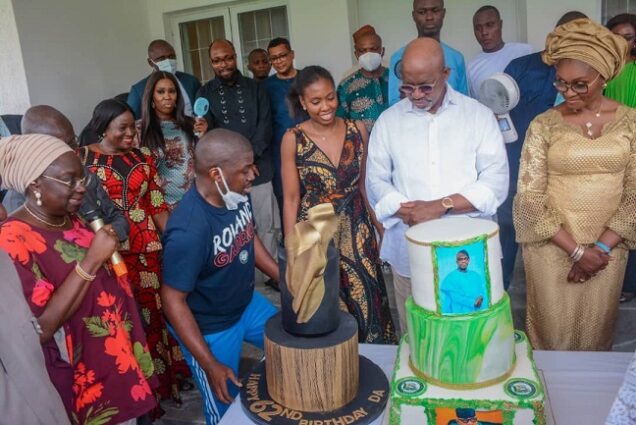 Governor Dapo Abiodun at the Presidential Lodge, Abeokuta, while addressing members of the state executive committee , secretariat staff and some Ogun APC members to commemorate his 62 birthday and third year in office.

Ogun governor, Dapo Abiodun, has appealed to those who lost in the recent All Progressives Congress (APC) primary elections held across the state to remain calm and take the outcome of the elections in good spirit.

This is just as he promised that they would be duly compensated for their show of sportsmanship, acknowledging their resilience.

Abiodun made the promise on Sunday at the Presidential Lodge, Abeokuta, while addressing members of the state executive committee of the party, secretariat staff and some party faithful, to commemorate his 62 birthday and third year in office.

The governor, who recalled his experiences while seeking political office, said he had contested several elections and lost, explaining that as far as the recent primary elections were concerned, there were no winners or losers.

“I am not an emperor by any chance and this is not my family inheritance. I am holding this position in trust for all the people of this state and I have vowed to be fair, just and equitable and this is my solemn agreement I made between the Almighty God and myself.

“To that extent, I have tried in every way to find a consensus around those to be chosen. I ensured that I consulted the party leadership because this is a democracy. In some instances, the person I actually wanted has not emerged and in some instances, they have, but all of us would not emerge. Regardless of that, I want us to see ourselves as winners and I can assure you that you will be well taken care of”, the governor said.

He, however, appreciated the people for their support and prayers, saying “I have tried with all sense of humility knowing fully well that it is by the grace of God and the collective will of all of you that I am standing here and I will not take it for granted”.

Abiodun, while also acknowledging the contributions of the state executive members and his staff, he urged them not to relent, but work harder to ensure that the state is well positioned just as he observed that the current administration conducted the most transparent and fairest governorship primary election in the history of the state

The governor said the day of the governorship primary election was triple celebrations as his administration clocked three years in office in the day which also coincided with his sixty two years birthday.

He stressed that those who have supported the party in getting to its present position needs to be appreciated, while those that have lost their lives should also all be remembered.

Abiodun assured that his government would continue to prioritize the welfare of the people by ensuring that programmes and policies are people-oriented.