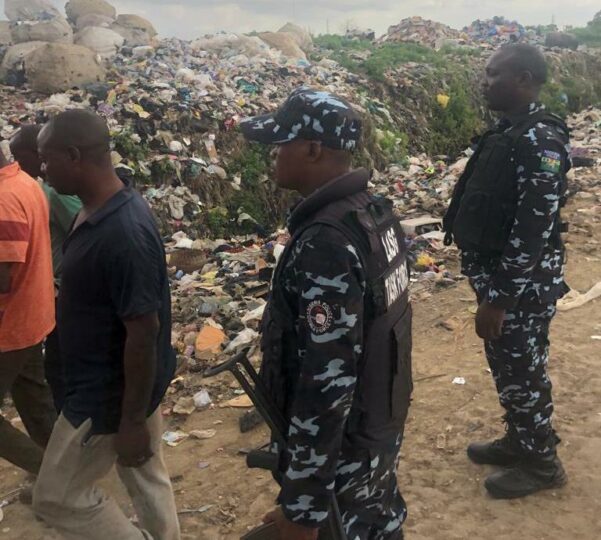 The Lagos State Taskforce on Environment and other Offences has arrested nine traffic robbery suspects at Olusosun dump-site, Ojota, during a raid.

The Director of Press and Public Affairs of the agency, Mr Gbadeyan Abdulraheem confirmed the arrest on Sunday in a statement, stressing that the operation was led by the Chairman of the agency, CSP Shola Jejeloye.

Abdulraheem said that apart from the taskforce clearing suspected criminals from the site, the state’s Ministry of the Environement was also involved in ensuring that the place did not not pose environmental hazards to residents.

He noted that the site had been known to be a safe haven for criminal elements who engaged in so many forms of criminal activities, including robbing in traffic.

“We have carried out raids on this dumpsite in the past and made some arrests of suspects with dangerous weapons mostly used for robbery in traffic.

“Clearing up the site now will definitely reduce the incidents of traffic robbery and pickpocketing around here.

“A total of nine suspected traffic robbers were arrested at the site during the exercise and found on them were dangerous weapons used to intimidate their victims during their operations,” he said.

The spokesman said that the exercise, which kicked off on Saturday, would be a continuous and thorough in order to ensure that cleanliness and hygiene was achieved and maintained on and off the dump site.