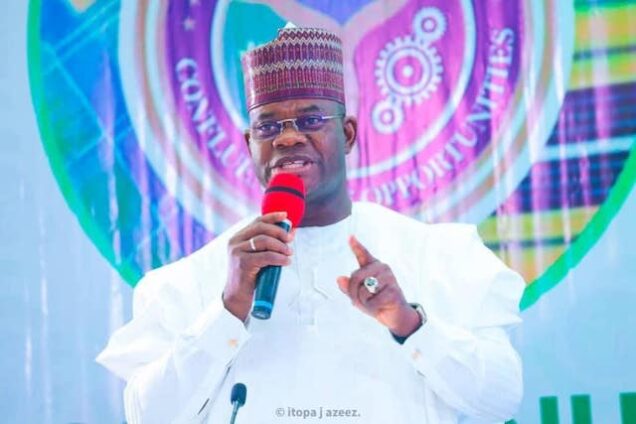 A support group for Yahaya Bello Presidency, YouthWinNigeria, has said the Kogi State Governor can defeat the candidate of the opposition Peoples Democratic Party, PDP, Alhaji Atiku Abubakar with a landslide across all the six geopolitical zones of Nigeria if he emerged as the flag bearer of the All Progressives Congress, APC in 2023 election.

The group said this while calling on leadership of APC to support the emergence of Bello as the party’s flag bearer in the 2023 presidential poll in its presidential primary scheduled for next week.

The group’s founder, Prince Abdulkareem Onyekehi, made the call in statement made available to journalists on Tuesday in Lokoja.

The opposition PDP at the weekend choose the former vice president as its candidate last weekend in Abuja.

But the group said the emergence of Bello as APC candidate in the upcoming presidential primary election will ensure seamless victory for the ruling party in 2023.

Onyekehi noted that the group, which has its structures and coordinators across the 36 states and the FCT, has been mobilising Nigerians “strategically to massively vote“ for Yahaya Bello in 2023.

“If you truly love Nigeria, give us Yahaya Bello as the candidate of the APC and victory will be assured for our great party come 2023.

“Yahaya Bello is highly revered and loved by Nigerian youths and women due to his unmatchable and uncommon achievements in women and youths development.

“Yahaya Bello will defeat Atiku with landslide victory across all the six geopolitical zones of Nigeria,” he said.

Onyekehi stressed that Bello’s achievements in Kogi, if replicated at the federal level, would perfectly address Nigeria’s problems, especially in the areas of the insecurity and disunity bedeviling the country.

According to him, the greatest of Bello’s achievements is uniting the people of Kogi who were once terribly divided along tribal lines as a result of injustice and marginalisation.

He emphasised that the governor had done excellently well in the areas of achieving equity and fairness, enhancing security, healthcare, education, modern infrastructure and rural development.

Onyekehi said the governor had also done well in the areas of transparency and accountability, youth and women development and had also given due recognition to the people living with disabilities.

Putting the percentage of eligible youths who are qualified to vote in the 2023 elections at 56 per cent, he said the vast majority of youths and larger percentage of women voters have accepted Yahaya Bello and are ready to cast their ballots for him.

“We, therefore, as a group, call on the leadership and delegates of our great party to vote massively for Yahaya Bello in the upcoming APC presidential primary election so that he can emerge as the party’s flag bearer in the 2023 general election, “he said.

Onyekehi doubles as the Special Adviser to the Governor on Special Projects and State Focal Person, National Social Investment Programme.