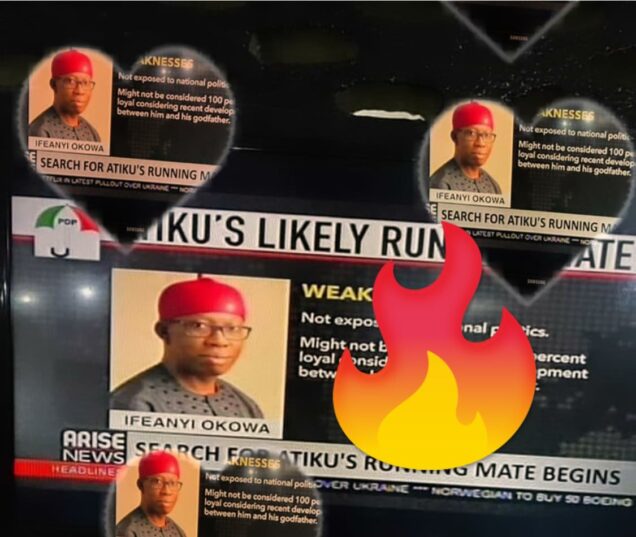 Arise TV says Okowa not a national politician and might be disloyal.

Arise TV in a broadcast on likely running mate for Atiku Abubakar had showcased a sticker that states that Okowa is not exposed to national politics and “Might not be considered 100% loyal considering the recent development between him and his godfather.”

Responding to the “weakness” broadcasted by Arise TV, Ossai said:

“I demand an apology from ARISE TV for airing the untrue weaknesses of our Governor Sen Ifeanyi Okowa.

Watching the broadcast of AIRISE TV on Atiku Abubakar’s likely running mate where they showcased the said weaknesses of Governor Okowa is a clear fact that ARISE TV lacks merit.

I know everyone has weaknesses but the ones aired by ARISE TV are false and they need to tender an apology for not carrying out an objective investigation.

They are wrong for saying Governor Okowa isn’t exposed to National politics.

Have they forgotten that Governor Okowa is a founding member of the Peoples Democratic Party, PDP have grown through the ranks as a public officer from being Secretary to Local Government Council to Chairman of Local Government Council, Commissioner, Secretary to State Government, a Senator representing Delta North senatorial district at the National Assembly and Governor of Delta state?

Okowa as a Party man and strategic member of the PDP has conducted two party national conventions adjudged to be the most peaceful, free, fair, and credible elective conventions as Chairman and Convention planning committee for the party.

He has chaired and co-chaired committees of reconciliations and has often been seen pursuing causes of stabilization of the party.

Is it the country economy team that Governor Okowa is part of?

As far Nigeria is concerned today, Governor Okowa has always been consulted in any of out national politics.

This is because he has displayed Wisdom in contributing his quota to National Politics and that is why on the national stage, they call him a POLITICAL MATHEMATICIAN.

When you talk about LOYALTY, then you are talking of Governor Okowa.

He has never betrayed the people he has worked with politically in the past and present.

This state is peaceful today because he has shown loyalty to leaders across the board.

“There is no politician in Delta State today that will say Governor Okowa has betrayed him or her.
So for this purpose, I demand an apology from Arise TV.”