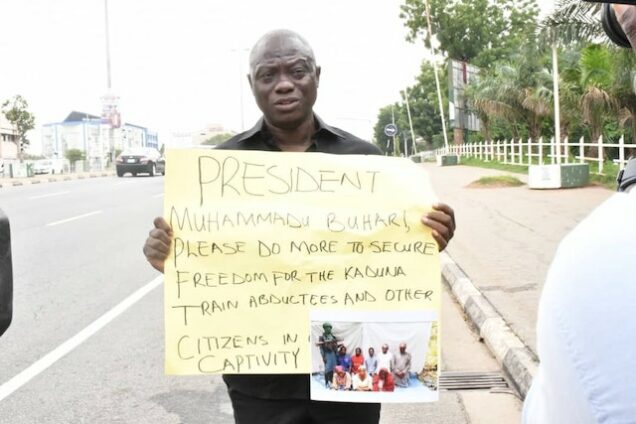 Rep. Bamidele Salam, (PDP-Osun) on Wednesday embarked on a one-man protest over the kidnapped victims of Kaduna train attack and appealed to President Muhammadu Buhari to ensure their release.

He carried a placard with the inscription “President Muhammadu Buhari please do more to secure freedom for the Kaduna train abductee and other citizens in captivity”, and walked from the Unity Fountain to the National Assembly Complex in protest.

Salam said that kidnapped victims of the train attack remained in captivity till now, adding that it was not clear how long they would be in held there.

“Whether they will remain there like the remaining Chibok girls kidnapped in 2014, Leah Sharibu, who has been in captivity since Feb. 19, 2018, the Bethel Baptist High School among others, no one can tell,” he said.

“The President must rekindle that confidence, and a good place to start will be to work assiduously to secure the release of the kidnapped Kaduna train victims.’’

Salam expressed worry over the turn of events in the country, saying it should not be a place where criminals would operate freely.

“One of the key dimensions of this criminality is the unholy practice of kidnapping for ransom, which according to reports, has spawned a billion naira industry in the last seven years or so.

“It is to our embarrassment as a nation that our wives, mothers, fathers, husbands get routinely kidnapped at will by bandits.”

The lawmaker lamented that many of them had been killed even after the payment of ransom by their families or communities.