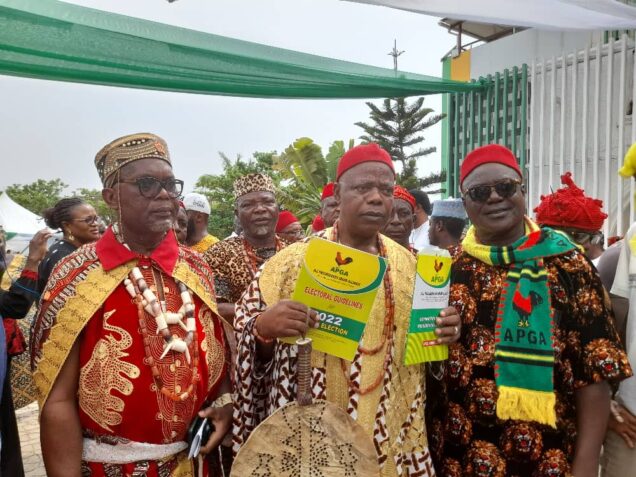 Prof. Peter Umeadi, presidential aspirant of APGA with his nomination and expression of interest forms

Professor Peter Umeadi, the former Chief Judge of Anambra State, has emerged as the Presidential candidate of the All Progressives Grand Alliance (APGA) for the 2023 General Elections.

Umeadi, who was unopposed, became APGA’s presidential candidate on Wednesday at the party’s convention attended by its leaders and members from the six geo-political zones in Abuja.

Confirming that the party delegates affirmed his candidacy by a voice vote, APGA National Chairman, Dr. Victor Oye expressed optimism that Umeadi would be sworn in as President of Nigeria in 2023.

Oye prayed that the party would also produce over 30 senators, as APGA would take Nigeria by storm.

Having served in the judiciary for 35 years, Umeadi was well equipped and is the candidate to beat in the election, according to Oye.

“APGA is a realistic party, we don’t build castles in the air, the emergence of Umeadi shows that APGA is united and would spring surprises by being elected president by Nigerians in 2023.

“We are here to do what is required, APGA does not believe in imposition, we gave everybody a level playing field to come and purchase form.

“At the end of the whole process our brother former Chief Judge of Anambra, a life-changer, a man of irrepressible character, a man who has shown capacity in many ways intellectually and otherwise, is today being presented to all of us for affirmation as our candidate.”

Reiterating that there was no crisis in AGPA, Oye added that no faction existed because his leadership was the one INEC recognised.

During his acceptance speech, Umeadi said that he was stepping out with the triple banner of rule of law, separation of power, and due process if elected.

He also promised to make Nigeria a great country, which every Nigerian would be proud of with a changed mindset.

“Our triple banner should form the structure for a new Nigeria, which an APGA government at the centre under my watch would bring about.

“Uppermost in my mind is how to reconcile with ourselves across the length and breadth of our dear country. In a new political culture, I undertake to galvanise the old, young, rich, poor, literate or not, from different religious persuasions and from all six geopolitical zones, to deliver a new Nigeria where justice would reign for all citizens equally, irrespective of tribe or status.

“Our next task as a political party is to secure votes at the polls from a majority of Nigerians. We would work hard to secure as many legislative seats as possible across the country. Nigerians should respect the ballots.”

Umeadi urged Nigerians to allow only valid votes to count and should, in the most vocal manner possible, enforce the extant laws such that no person who is palpably below the age of 18 years should be allowed to vote.

In addition, such votes cast were invalid votes and should not count in arriving at the result of the election in the particular polling booth across the country.

Umeadi expressed worry that Nigerians were traumatized on daily basis from wanton killings, displacements, disorganisation of business and social life with attendant difficulty to sustain economic, commercial, and domestic life.

According to him, it is not possible for Nigeria to achieve economic, educational, scientific, sporting, or sufficiency breakthroughs when the citizens are hungry, insecure, and unstable.

“My solemn pledge is to develop Nigeria from within. I would work assiduously for a sound education, affordable health care, food on the table, security of life and property, and one’s ability to achieve their life ambitions in a setting presenting a level playing field and pre-determined standards.”

Also, he pledged to remove personal interest in its entirety from the picture in the course of his official duties if elected.

“We expect to usher in patriotism, collective reconstruction of our economy, upliftment of all segments of our society, promoting probity, accountability, and dedication in our public and private lives,” Umeadi said.