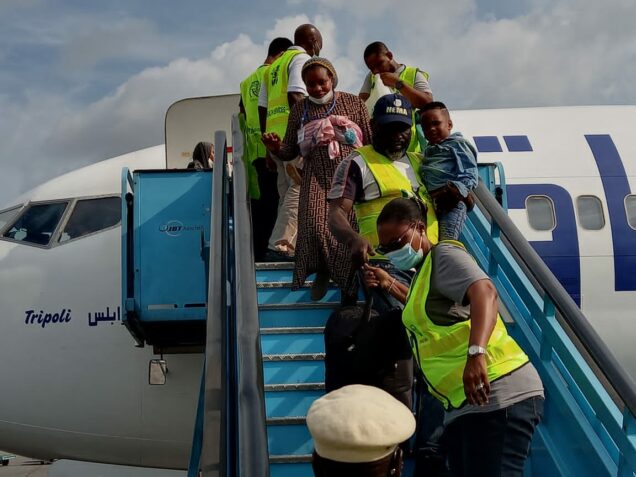 The stranded Nigerians on arrival from Libya to Nigeria on Wednesday

Acting Coordinator of the Lagos Territorial Office of NEMA, Mr Ibrahim Farinloye, confirmed the development to the News Agency of Nigeria (NAN) in Lagos.

Farinloye said the returnees arrived at the Cargo Wing of the airport on a chartered flight at about 3:30 p.m.

He said they were returned to Nigeria with the assistance of International Organisation for Migration (IOM) through a voluntary repatriation programme.

The programme was packaged for distressed people who had left their countries of origin to seek greener pastures in various European countries, but could not afford to return when their journeys became aborted.

“We admonished the returnees to realise that there’s no country like their own.

“We told them that here you have all the freedom to achieve your potentials; looking for greener pastures in foreign land is no longer a reality.

“Those countries are not better off when you compare the challenges you encounter there with what obtains here.

“You are encouraged to be positive ambassadors toward advocacy and sensitisation against irregular migration that leave youths vulnerable to all sorts of abuses and death in extreme cases.

“You are advised to settle down to harness better potentials that abound in all parts of Nigeria and with enabling environment created by government in recent times.

“Everyone with patience and perseverance will attain his/her potentials by the grace of God,’’ he said.

Farinloye said sister agencies like the Nigeria Immigration Service, the Port Health Service, the DSS, the Refugee Commission, the Federal Airport Aviation of Nigeria and the Nigeria Police were at also hand to receive the returnees.