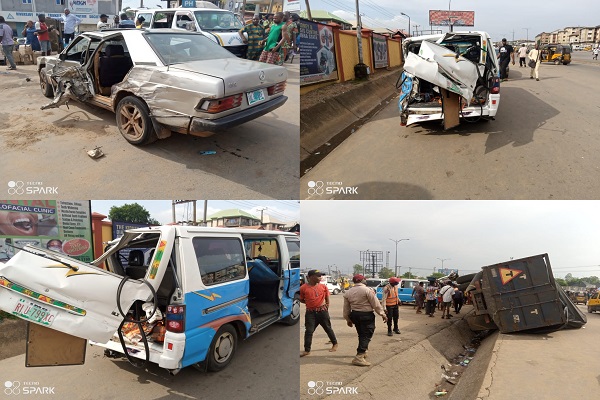 The Sector Commander, Mr. Adeoye Irelewuyi, confirmed the accident to the News Agency of Nigeria (NAN), in Awka on Thursday.

Irelewuyi said the accident, which occurred on Wednesday evening, could be attributed to brake failure and loss of control.

“Eyewitness report indicates that the brake of the Mercedes Benz truck, fully loaded with tiles and other building materials failed, the driver lost control and rammed into three stationary vehicles and two pedestrians, and crashed.

“A total of four persons comprising three male adults and a female adult were involved in the crash.

“FRSC rescue team from Upper Iweka outpost Command rushed the victims to Toronto hospital, Onitsha, where a male adult and a female pedestrian were confirmed dead and their bodies deposited at the hospital morgue, ” he said.

He said that efforts were being made to tow the truck to the Central Police station in Onitsha.

While condoling with the families of the dead, the Commander urged motorists to ensure their vehicles met minimum safety standards before plying the road