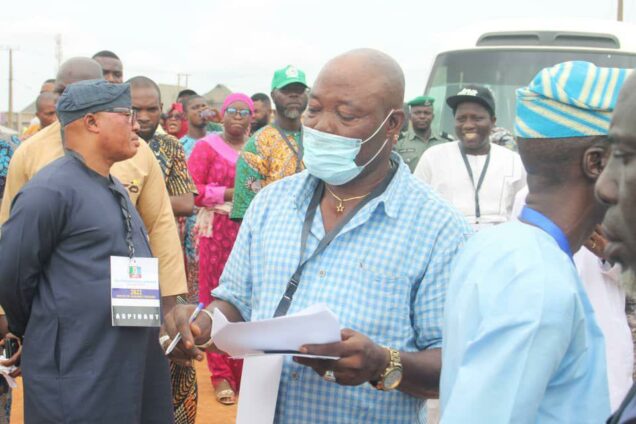 The election which took place on Friday, May 27th, 2022 was described as peaceful and law-abiding as forty delegates were ushered out after casting their votes as instructed by the Ikorodu constituency 2 electoral officer team Lead.

The presence of some security enforcement officers led by the DPO Ikorodu Police Headquarters, Mr Remi Balogun was also revealed as a factor that strengthened the orderliness of the election.

It was, however, noted after the election that Hon. Nurudeen Saka Solaja won the election after ballot paper sorting where NS Solaja polled 23 votes to defeat his opponent Mr Aro Moshood Abiodun(AMA) who had 16 votes with 1 void vote.

“Our people have spoken overwhelmingly and surely that loud voice is the voice of God. We won with 23votes against 16votes polled by AMA with 1 void. But the instruction of the party on vote counting, filling of result sheet and official announcement must be strictly adhered to, which would be communicated in due time,” Solaja said.

Controversies started when the results of the election which was expected to be announced by the Electoral Officers at the State Party Secretariat that night were delayed and a whistleblower spilled the information through a telephone conversation with Hon Solaja that the result had been manipulated to Favour AMA as against the original result.

Hon. Nurudeen Saka Solaja who was contesting for the third term in the Lagos state house of assembly was, however, displeased with the situation as he sensed conspiracy on the part of the electoral officers and his opponent.

The Camp of Hon. Solaja has, however, filed a petition to the Lagos State All Progressive Congress Assembly Appeal Committee on Tuesday, May 31st,2022 objecting to the fake result, but As at the time of filing this report, the petition had been acknowledged and considered, while the entire Ikorodu constituency 2 await the Appeal committee’s report and final decision of the party.