'Why Tinubu is best suited to succeed Buhari' 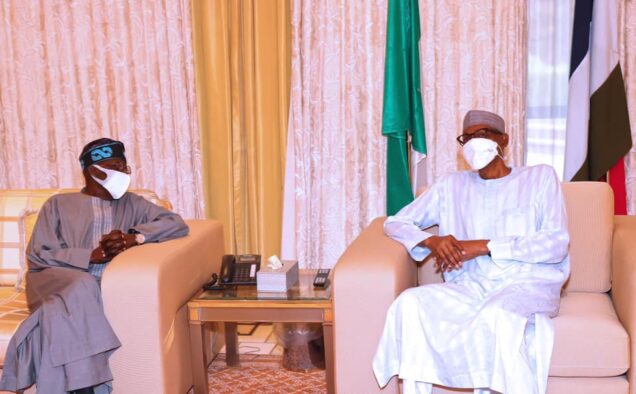 The Nigeria Diaspora for Asiwaju (NDA) has said Sen. Bola Tinubu is the only one qualified to be President Muhammadu Buhari’s successor among the over 20 aspirants seeking to fly the flag of the All Progressives Congress (APC) in 2023 presidential election.

Mr Ayobami Oyalowo, National Spokesperson of NDA, said this in an interview with the News Agency of Nigeria (NAN) on Thursday in Abuja.

Oyalawo said it was only Tinubu, former two-term governor of Lagos State, that could consolidate on Buhari’s achievements in the last seven years.

The NDA spokesman noted that Tinubu’s loyalty and commitment to the APC could not be questioned.

NAN reports that the president, who met with 22 APC governors on Tuesday, shortly before his departure to Spain for a State Visit, had solicited their support in choosing his successor.

He told the governors at the meeting that the qualities he wanted in a successor was a leader who would be able to keep the country together as a united entity.

Buhari also said that his successor should be able to secure the country from the threats of terrorism, insurgency and other violent crimes, which had been holding Nigeria hostage and preventing citizens from realising their potential and attaining their destiny.

Oyalowo while admitting that these qualities were exactly what Nigerians were currently looking out for in a leader, said Tinubu was a perfect match.

He described Tinubu as a de-tribalised leader and political strategist with the experience, capacity and exposure to lead, saying that he was more than qualified to be Nigeria’s next president.

He said history would record Tinubu, who is also one of the leaders of the APC, as the brain box behind the party’s many successes and its ride to power in 2015.

According to him, Tinubu is the most loyal and electable aspirant, having won election as leader of Nigeria’s notable state twice.

“It is only Tinubu that can consolidate on Buhari’s achievements in the last seven years.

“As a founding member of the APC, he had committed not only his time to building the party, but his resources and energy.

“Tinubu in his political career, had never lost an election, we are therefore confident that with him on the ballot, it will be a sure victory for the APC in the coming 2023 presidential election.

“He has vast knowledge in economic management and a perfect understanding of Nigeria’s political economy,” Oyalowo said.

He noted that as governor of Lagos State twice, Tinubu raised the state’s internal revenue generation from a paltry N600 million monthly to N51 billion as of today.

He said as governor, Tinubu got an invitation to Enron to begin the first state-backed power generation and how the country would need to take the power transmission highway.

This, he said, was among several other achievements, including infrastructure development in the state.

Oyalowo, however, expressed gratitude to the president for his confidence in Tinubu over the years.

He said the NDA was confident that the “Jagaban” would emerge APC 2023 presidential candidate at the primary election slated for June 6 to June 8.