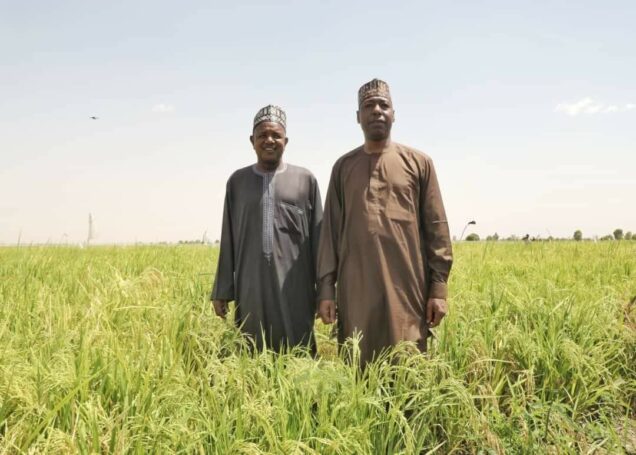 Borno State Governor, Babagana Zulum says his administration cultivated over 30,000 hectares of rice farms across resettled communities in the state.

He stated this while conducting Kebbi governor, Abubakar Bagudu, who visited one of the rice plantations, in Damasak, Headquarters of Mobbar Local Government Area of the state.

Zulum said the farms were established through the mega farm programme initiated by his administration to transform agriculture.

The governor said the return of relative peace led to the reactivation of irrigation activities around Lake Chad, Alau Dam, Baga, Nguro Soye and some liberated communities across the state.

According to him, the development also increased Borno’s local sourcing of vegetables rather than supplying it from other parts of the country.

Addressing the farmers on one of the farms, Bagudu whose state is known for rice production, said that he accompanied Zulum to Damasak to see for himself the resumption of farming activities in Borno.

“Let me say how honoured I am to be standing here in Damasak to support my brother.

“When he told us the big story, I asked him, can you take me along with you (to Damasak)? We always celebrate him (Zulum) and appreciate what he is doing for Borno and Nigeria.

“His doggedness and courage are why I joined him in coming to see this farm in Damasak, among other efforts that he is doing in returning normalcy to Borno and indeed normalcy to Nigeria”, Bagudu said.