I never issued any statement in response to Tinubu: Dapo Abiodun 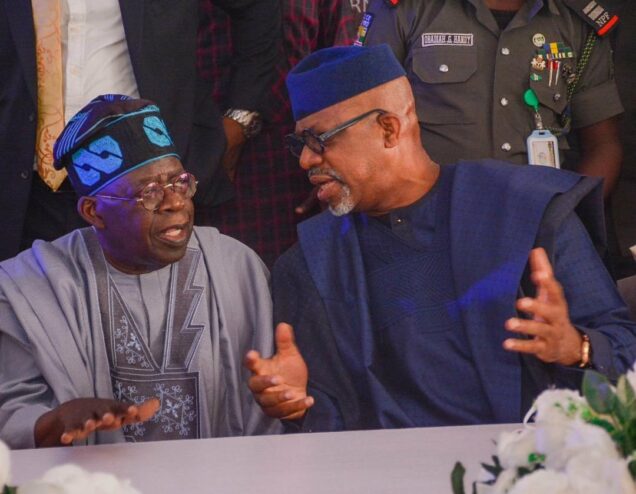 I never issued any statement in response to Tinubu: Dapo Abiodun

Governor Dapo Abiodun has denied issuing any statement in reaction to the statement made by Bola Tinubu during his recent visit to party delegates in Ogun state.

Tinubu while speaking on Thursday in Ogun said he expected those he has helped to work with him in achieving his 2023 presidential ambition.

The APC National Leader, however, listed Dapo Abiodun who had endorsed Yemi Osinbajo for the 2023 presidency as one of the beneficiaries of his political powers.

He claimed that APC stakeholders had rejected the Ogun governor but his intervention changed the game.

He said: “Dapo that’s sitting down here, could he have become Governor without me?

“We were at the stadium; they tore all his posters. Even the party flag, they didn’t want to hand over it to him. I was the one who brought it. If he wants to meet God at the right place, he must know that without God and me, he would not have become Governor.”

However, a statement that surfaced on Abiodun’s Twitter page on Friday reads:

“I am not an emperor by any chance and this is not my family inheritance.

“I am holding this position in trust for all the people of this state and I have vowed to be fair, just and equitable and this is the solemn agreement I made between the Almighty God and myself.”

Multiple reports claimed that the statement was the governor’s reaction to Tinubu.

But the Abiodun-led administration has now released a statement titled ‘Governor Abiodun never issued any statement in response to Asiwaju Tinubu —Ogun Govt.”

The statement released on Friday night was signed by Abdulwaheed Odusile, Commissioner for Information and Strategy.

“The attention of the Ogun State Government has been drawn to comments purportedly made by Governor Dapo Abiodun in reaction to statements made by the National Leader of the All Progressives Congress (APC) and presidential hopeful, Asiwaju Bola Ahmed Tinubu, during his recent visit to party delegates in the state.

“For the avoidance of doubt, the tweet released this morning was an extract to re-emphasize the comments of Governor Abiodun to party faithful and appointees on May 29 during the celebration of his third year in office, which also coincided with his 62nd birthday.

“The comments could, therefore, not have been a response to comments by Asiwaju Tinubu whose visits to Abeokuta came five days later.

“While Governor Abiodun appreciates the media, including online platforms, as partners in progress with Government, he enjoins media practitioners to always report the truth at all times and refrain from giving vent to fake news, distortions and misinterpretations.”