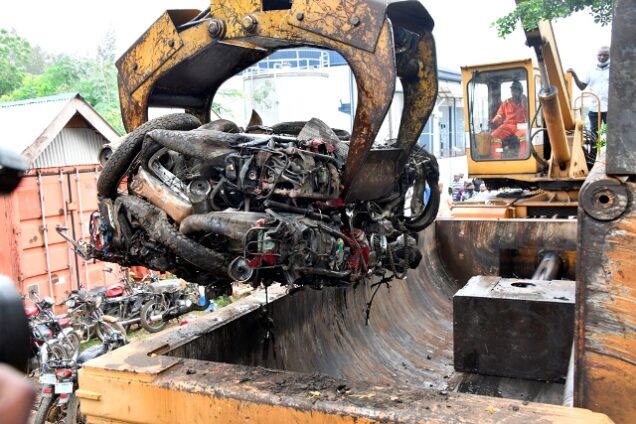 The Lagos State Government on Friday crushed 2,228 motorcycles, popularly called Okada seized in areas where their operations have been proscribed

The State Government had begun enforcement of the total ban on the activities of okada in six Local Government Areas and nine Local Council Development Areas within those LGs on Wednesday this week.

Addressing newsmen at the Task Force ground in Alausa, Ikeja, Commissioner for Information and Strategy, Gbenga Omotoso, in company of his Transportation counterpart, Mr. Frederick Oladeinde and the Chairman of the Lagos State Task Force, Shola Jejeloye, explained that over 5,000 okadas seized in the first quarter of this year, had earlier been crushed.

Omotoso warned that the state government would no longer accommodate the use of okada as a mode of transportation in the affected areas.

“We are sending a very strong signal to anyone who feel that despite the pronouncement of Mr. Governor you can come and run okada business in any part of Lagos that is included in the ban is not going to be possible.

“This is going to be the fate of any Okada that is apprehended and all the people who are riding Okada and the passengers, they will be facing the law, we assure Lagosians that the action taken will continue,” he said.

Omotoso, who noted that over 700 youths had been grievously affected by okada related accidents, urged them and other youths to take advantage of the First and Last Mile Buses under the bus reform initiatives and opportunities available at the Lagos State Employment Trust Fund to get empowered.

“We are not leaving them to their own devices, they can form cooperatives and join the state government scheme, some of them have come up even with money to join the bus scheme because they know that okada is not part of the transportation plan by the Lagos State Government has.

“Whether you like it, sooner or later, it is going to be phased out all over, the young people can go to the Lagos State Employment Trust Funds and bring up nice proposals, most of those who had done so are being helped by the LSETF,” he added.

The Chairman of the Lagos State Task Force, Shola Jejeloye stated that the agency would not relax the enforcement of the ban.

“I am passing this message to them that from next week, we would do more intense enforcement, even those areas we cannot get to this week, we will get there.

“The sustainability plan is the next phase which we are entering from Monday, there is no going back, it is a government policy and government does not make mockery of it’s decisions,” he said.

The Commissioner for Transportation, Frederic Oladeinde reassured Lagosians of the state government’s commitment to the bus reform initiatives, as well as the completion of the rail lines to make commuting easier for them.