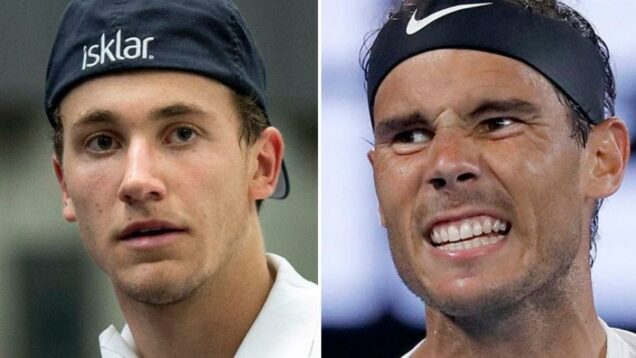 Rafael Nadal continues his quest for a 14th Roland Garros title and 22nd Grand Slam – the most in the history of tennis.

The 35yr old Spaniard spent 4hrs 12min playing the 21yr old and current world no.9 (Career high) and must be excited to clear the tricky test against a determined Auger Aliassime.

The clay court specialist then faced world No.1 Novak Djokovic in the QF and thoroughly dominated the current Roland Garros champion in 4hrs 13min (6-2 4-6 6-2 7-6) to move into the SF where he went up against Germany’s No. 1, Alexander Zverev.

He went behind early in the game (2-0) but was able to level up after some special play and 13+ unforced errors from his opponent. The first-set was eventually settled on tiebreak with Nadal winning [(7-6 (10-8)].

In the second-set, it was a game of breaks (8) and was then taken to another tiebreak decider which ended in an unfortunate turn of event (match retired) after seeing Zverev twist his ankle, and having to walk on crutches.

“I have been there in the small room with Sascha before we came back on court and to see him crying there is a very tough moment so just all the best to him and all the team” – Nadal after Zverev’s retirement with ankle injury.

Casper Ruud came into his first RG as one of the heavy favorites to lift the trophy alongside World No.1 and current champion Novak Djokovic, Rafael Nadal, and man of the moment Carlos Alcaraz.

FACT: Casper Ruud is the first Norwegian man in a grand slam semifinal & final in the open era. He’s also the first man since Robin Soderling in 2009 to reach his first Roland Garros R16, QF, SF and final in the same year. Amazing!

PREDICTION: While its the first encounter between these two clay courters, Casper Ruud will need to play out of this world to defeat Rafael Nadal in his favorite tournament final.