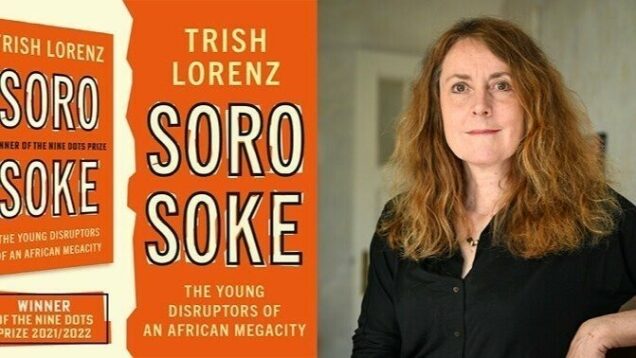 Trish Lorenz, British Journalist and author of the book, “Soro Soke: The Young Disruptors Of An African MegaCity”

Though the EndSARS protest which rocked the country in 2020 seems to have simmered down, the unassailable spirit of resilience and speaking truth to power, which defined it, lives on. And its rippling effect is still very much around as Nigerians have taken the protest a notch higher beyond the borders of their country.

Nigerians demonstrated this undying spirit, this never-say-die attitude and hanker for justice and good governance recently when they organized an online protest in a form of a petition against Trish Lorenz, British Journalist and author of the book, “Soro Soke: The Young Disruptors Of An African MegaCity” as well as its publisher, Cambridge University Press, Crassh.

The Berlin-based journalist had taken to Twitter to celebrate the project which was published in May. She also said the book won her the 2021 Nine Dots Prize, which honours creative thinking that tackles contemporary social issues. “I am so excited that my first book, Soro Soke, is published today. To see it advertised in the CUP bookstore windows is mind blowing. I can’t stop smiling, she tweeted,

However, the author would not smile for a long time, as another statement she made has come back to haunt her. She said in an interview that she was the one who named the End SARS protesters the “Soro Soke generation.” “This cohort exhibits a confident outspokenness and a tendency for creative disruption, leading me to name them the Soro Soke generation,” she averred.

This claim by the award-winning journalist did not sit well with Nigerians who believe that Lorenz was not profiting from their labour and sweat but also appropriating a cultural product. And she came under intense criticism on social media.

“How can you name and claim what was already existing? She has no connection to the struggle yet she capitalises, benefits and profits off the trauma of Nigerians.

“This is a Nigerian story to tell and we have Nigerians who are qualified to tell it. We have already told it without support or visibility. African stories must be told by African people,” the online petition reads, adding that the book is an intellectual property theft and gross disrespect to Nigerians.

The petition demanded that Lorenz apologize to Nigerian and the interview be taken down. However, the petition, which has had more than 7. 000 signatories, has yielded some fruits, as it has forced Cambridge University, the publisher of the book to retract some claims the author had made.

“There was no intention by Trish Lorenz or anyone involved with the book, to suggest that Trish invented the phrase ‘Soro Soke Generation’,” the joint statement read.

“No such claim was made in the book. Rather, it was an unintentional turn of phrase in a single interview, the text of which has now been corrected.

“Soro Soke was chosen as its title due to its use as a rallying cry and call for change among young protestors in Nigeria, something which is made clear in the book.”

In her book, Lorenz examined the bravery of youths who led the movement and featured the views of some Nigerians who took part in the demonstration in the book whose title, ‘Soro Soke’ is a phrase of Yoruba origin meaning ‘speak out’ or ‘speak louder.’ And it gained prominence, becoming a slogan during the #EndSARS protest against police brutality and bad governance in 2020.

The petition titled, ‘Recall “Soro Soke” from Publication- Author cannot CO-OPT and steal a Nigerian Movement!’ was started to this effect. The petition reads,

“Sóró Sóké is a Nigerian movement. One that came with our blood, sweat and tears. We are yet to recover from the aftermath.

“Sóró Sóké means Speak Up/ Do not be Silent in the Yoruba language of West Africa. It was a cry, a battle chant, a movement used in the #EndSARS campaign by Nigerian protesters fighting against police brutality from the Special Anti-Robbery Squad (SARS) in October of 2020.

“The phrase indicated that the Nigerian people would no longer put up with bad governance and they would speak out boldly. Protests and community gatherings were held to ‘Sóró Sóké’ (Speak out).

“Unfortunately, in the course of the protests, the authorities responded with the military and over 50 Nigerians’ lives were lost. Many protesters and activists are still in jail, some in exile. Nigerians have not recovered from the aftermath.

“In all of this, Trish Lorenz, a white woman from Germany, decides to expropriate and abuse the name of the struggle reminiscent of the actions of her ancestors in the Berlin conference of 1884/5.

“She has also expropriated Sóró Sóké which is a work product and symbol taken from the Yoruba nation/tribe of Nigeria and its indigenes.

“In an interview with Crassh, she provides false claims, stating: ‘This cohort exhibits a confident outspokenness and a tendency for creative disruption, leading me to name them the Soro Soke generation’- Trish Lorenz.

“How can you name and claim what was already existing? She has no connection to the struggle yet she capitalises, benefits and profits off the trauma of Nigerians.

“This is evidenced by her winnings from The Nine Dots Prize which comes with a remuneration of about $100,000. She has also received book deals with Cambridge University press and has her books in global bookstores and universities such as Harvard University library.

“This is a Nigerian story to tell and we have Nigerians who are qualified to tell it. We have already told it without support or visibility. African stories must be told by African people..

“Our Ask: 1. This book is intellectual property theft and gross disrespect to Nigerians. It is pouring salt on our open wound. Therefore, publishing must be halted and it should be pulled from all bookstores. (This has been done before when the book “Bad and Boujee: Toward a Trap Feminist Theology written by Jennifer M Buck, was pulled for cultural appropriation and intellectual property theft.)